Everyman Espresso threw a party at Underwest Donuts last night—you know, that great donut shop within the Westside Highway Car Wash over on, yes, the West Side Highway—and everyone got jacked up on caffeine and sugar.

The occasion for the PR-driven festivities was the launching of Everyman's "coffee concierge" concept—or, Everyman To Go—which basically means you can hire a crew of their crack baristas and coffee-cocktailers to come to your next fancy event and serve guests both the expected (Mpemba espressos) and the boozy (the Snow Day, which features, among other things, pimento bitters). Prices start at about $250 an hour, which, unless you plan on pumping caffeine into your guests all night long, seems actually doable. 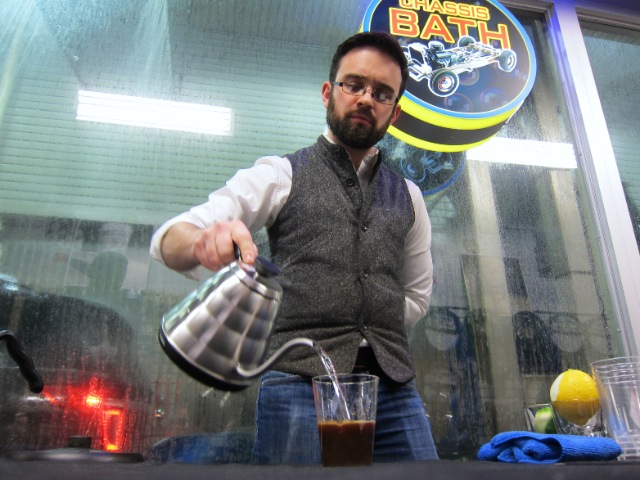 But for at least one sweet-treat junkie/blogger in attendance, the most exciting news of the night was the unveiling of a brand new flavor at Underwest, the fantastic Maple Waffle Donut, which is intensely maple-y and comes complete with crunchy bits of what look like stroopwafel on top.

It's no real surprise that the Maple Waffle Donut is so good; Underwest owner and baker Scott Levine spent time as a sous chef at Chanterelle, and did a stint concocting all sort of crazy flavors at Il Laboratorio Gelato, before opening this place last fall. In fact, all of the glazed, cake-style donuts at Underwest are first rate, especially the Brown Butter and the Halva. 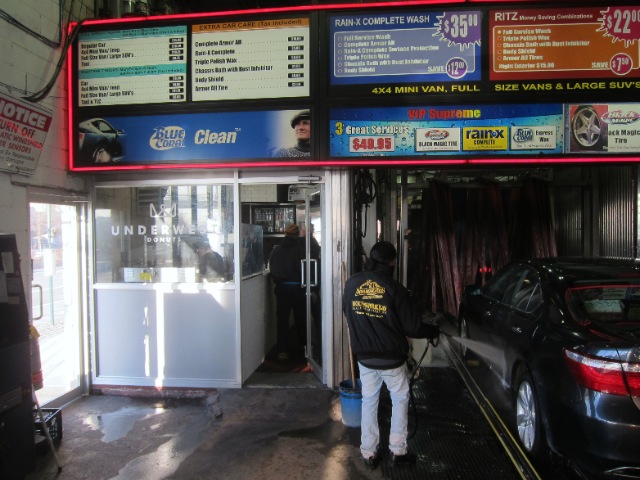 Make no mistake though, the setting here is first and foremost a car wash, and an extremely busy one at that, with a non-stop procession of vehicles cruising in off the highway for a trip through the brushes. And, presumably now, for a donut or two as well. If you own a car, and need it washed, the choice of venue seems pretty obvious. Or take a snack break the next time you're biking or jogging along Hudson River Park, and put those calories you just burned off, right back on!

And now, Zen out to these videos of Underwest Donuts in their natural setting...

Everyman Espresso has two locations, in the East Village on 13th Street near 3rd Avenue, and in Soho on West Broadway right above
Canal. More info on the Everyman To Go Coffee Concierge program can be found here.

Underwest Donuts is located inside the Westside Highway Car Wash, at 12th Avenue and 47th Street