Can YOU Conquer The All-In-A-Cone Super Sundae?

Get tipsy on Pier 15 this Saturday at the 2nd annual NYC Super Craft Beer Festival at the Watermark Bar. Over 80 breweries will be in attendance, pouring IPAs, sours, lagers and some ciders, too. There are several ticketing levels, starting at $15 for entry and three tastings; $30 for entry and five tastings; and unlimited tasting options ($70) for afternoon and evening sessions. All tickets include a souvenir glass.

On Saturday at the Knitting Factory it's a Puppies n' Pints Doggy Darty party from 12:30 to 3:30 p.m. Swing by the venue to mingle with adoptable pups from Badass Brooklyn Animal Rescue and maybe even sign up to foster one or give one a forever home. The happy hour-style event is a casual opportunity to de-stress and pet some pooches while sipping on a few beers. Tickets $12. 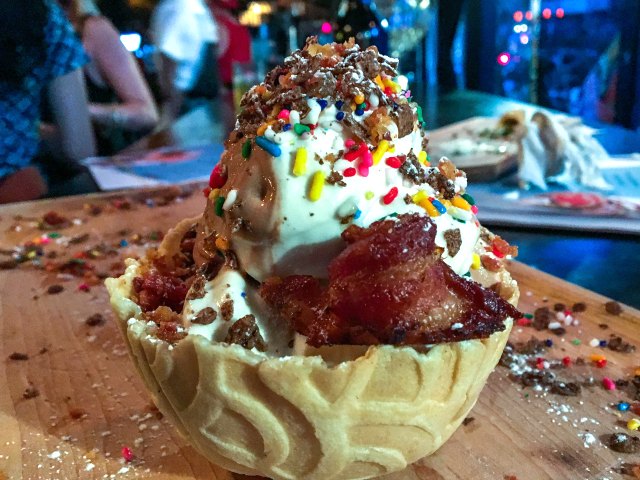 Brooklyn's Black Tree Location begins a new prix-fixe Sundaes on Sunday meal beginning this Sunday and running through August. In partnership with Smithfield, the restaurant will offer a bacon-heavy set menu ($22) centered around the crowning jewel: The All in a Cone (pictured above) with goat milk maple and Smithfield bacon chocolate twist in a Bourbon Konery Kone with truffle honey, Cocoa Pebbles, more bacon, a chocolate shell, a bacon rose and a Cocoa Pebbles krispy treat. Also on the menu: a quail egg-bacon-cheddar dumpling, a bao with maple bacon and 7-spice ricotta, and a bourbon-cherry-cinnamon cocktail. For opening weekend this Sunday, they'll have live music and samples between 3 p.m. and 7 p.m.

Elsewhere in ice cream land, there'll be scoops by the score at the NYC Summer Ice Cream Blizzard hosted by Grand Bazaar NYC, a weekly market on the UWS. The benefit program (100% of profits go to four local schools) begins at 10 a.m. and runs until 5:30 p.m., with 12 artisanal ice cream vendors scooping up over 60 different types of frozen treats. Ice & Vice, melt ice cream sandwiches, The Paleo Factor, LizBeth's Dessert Boutique and Kingleche Cream are among those attending this free-to-enter event.