The 80-year-old Gem Spa has long been known as the only place in the city when you can get a pack of smokes, imported music magazines, an egg cream, and a fortune reading. But times have changed, and Gem Spa's longtime owners are hoping to keep its status as the city's most iconic corner store while finding new ways to exist in the rapidly changing East Village.

Beyond its function as a reliable late night spot, Gem Spa is perhaps as quietly important to the neighborhood’s identity as CBGB, the Village Voice, or anything else. The major difference is: Gem Spa is still there while those others have long since gone.

"This is a legendary place," says Parul Patel—daughter of owner Ray Patel. “It’s iconic. It’s actually protected as a landmark, the building is."

But while Gem Spa holds the lease, they don’t own the building, and the newsstand business isn’t what it used to be. So while the store at the corner of St. Marks Place and Second Avenue remains well-stocked in Juul pods, cell phone accessories, and other accoutrements of millennial urban life, and gets a healthy amount of tourist walk-ins, Patel is hoping to up its traffic—and spread its brand a bit.

The store has a few new flavors of egg cream in development to go alongside its classic chocolate, vanilla, strawberry, and creamsicle varieties ($5), as well as a brand new @besteggcream Instagram account. (Many local business owners, including those in the Flower District, have begun pinning their hopes on Instagram.) There will also be more scarves and t-shirts for sale alongside the around-the-clock services of Zoltar the Fortune Teller ($2). And starting tonight, Gem Spa will host its first Egg Cream Happy Hour on Fridays from 5-7 p.m., featuring discounted egg creams and sugary networking opportunities.

“We were already on Instagram,” Patel says. “People have been hashtagging #gemspa and taking pictures of the egg creams and the jelly rings and the cat and the storefront.” 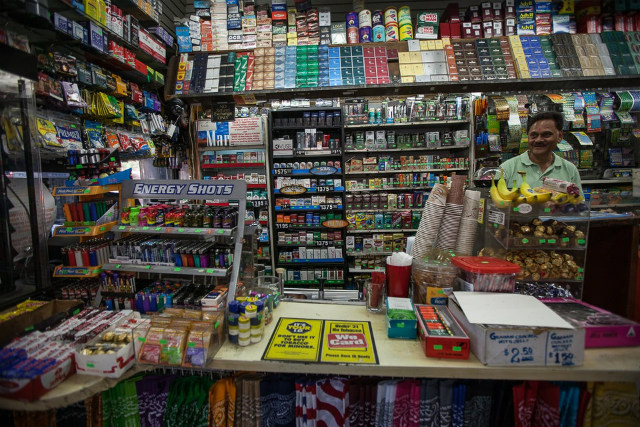 Gem Spa’s history is intertwined with that of the East Village. It’s where Robert Mapplethorpe bought Patti Smith an egg cream on the day they met. It’s on the back cover of the New York Dolls’ 1973 debut (and where, according to lore, Johnny Thunders and others went for post-heroin sugar fixes between sets at CBGB). Before that, it was where Abbie Hoffman gathered Yippies to rain money on the New York Stock Exchange. It’s where Allen Ginsberg, Ted Berrigan, and other neighborhood poets went to pick up the Sunday New York Times on Saturday nights (and which was inevitably commemorated in their poems). In 1969, New York magazine analyzed their sales.

“One of our customers was in Paris and went to a museum, and happened to see this work with the words ‘Gem Spa’ and they thought it was a coincidence and went it looked it up,” says Patel. The painting in question was Jean-Michel Basquiat’s “Untitled (Gem Spa),” 1982. “Basquiat used to live here,” she marvels. “He was dating Madonna. They would come here. She was singing at Club 57.”

Properly, the store was once named GEMS Spa, an acronym for Gladys, Etta, and Miriam Silverstein-Shepard—after the wives and ex-wife of the store’s 1950s owners, Ruby Silverstein and Harold Shepard. The S disappeared, and often the capitalization, but, in Silverstein’s estimation, the previous owners had been there for at least 30 years when the store got its new name in 1957. The egg creams have been flowing at the corner of St. Marks and Second Avenue almost continuously since the 1930s.

“It really was an oasis in the middle of this drug-infested neighborhood,” says Patel. “My dad bought the store 1985 or 1986. He ran a bunch of candy stores throughout Manhattan, the Bronx, and Brooklyn over the years. But he wanted to get out of the Bronx and Brooklyn and go to the city. He had a place on the Upper West Side, but the partnership dissolved, and then he found this spot. It was bustling. You never saw it empty.”

“It defied categorization even in the early days,” says Lisa Jane Persky, a photographer and actress who grew up in the neighborhood. In the early 1960s, her school bus dropped her off down the block from Gem Spa, which was already a distinct metropolitan blend of newsstand, old-fashioned candy store, and Lower East Side. “They used to have gigantic hunks of tan halvah that they’d cut pieces from and sell,” she says, which continued into the ‘80s. (There’s still halvah, though it’s packaged now.)

After a closure in early 1971 and a fire the following spring, the store reopened with new management in summer 1972. The egg creams weren’t quite the same at first. “They had to figure it out,” says Persky, “how to make them, I mean, because people demanded them.” But they did, and Gem Spa continued to thrive as St. Marks Place flowered slowly from the punk era into the neighborhood’s eventual (re)gentrification, almost exactly the moment when Ray Patel took over the lease and learned the recipe.

"It’s a forgotten art, a lost art," says Parul Patel, pointing at the sparkling and increasingly hard-to-service fountain next to the cash register. "I’ve been making egg creams since I was a teenager. So even though I hadn’t made them in a few years, when I started coming in again because my dad’s sick, it was like riding a bike—the syrup, the milk, the seltzer, stir like this..."

“Gem Spa has the most evocative name and most auspicious corner of any business in the East Village," says Ada Calhoun, author of St. Marks is Dead (W.W Norton), a colorful chronicle of the street’s many deaths and resurrections. "My parents have been buying their paper there most mornings since 1973." Growing up slightly later than hippies’ and punks’ first waves, she remembers she remembers Gem Spa as a platform for local "Meat is Murder" vegan organizers, as well as the poet and zine publisher Sparrow.

Notes ‘90s Village Voice contributor Erik Davis, and author of the new book High Weirdness: Drugs, Esoterica, and Visionary Experience in the Seventies (MIT/Strange Attractors), “In the early ‘90s, which in retrospect was the last gasp of non-internetted print-based subculture, Gem Spa was a beacon, a Library of Alexandria, a mutant node of rare and wild media. It created a wormhole of weird that leaked into the space outside, transforming the whole block.” 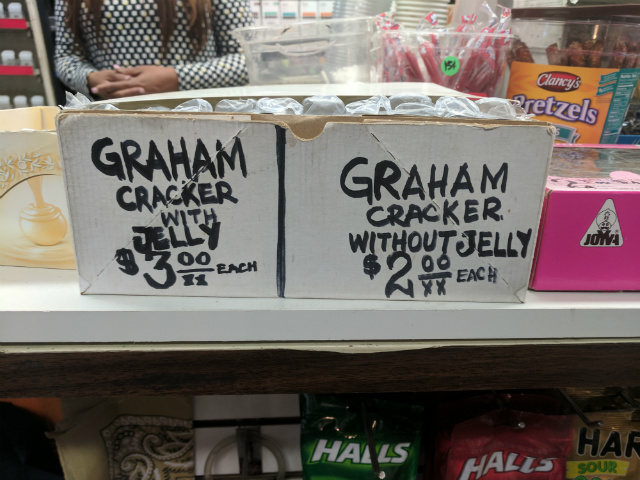 Perhaps not coincidentally, the extreme gentrification of the area matched exactly with the rise of the Internet and smartphones, and the decline of print culture. When one had to leave the house in search of specialized information, via gossip or print, Gem Spa was a prime destination. But where every surface of the newsstand used to be covered with publications, the magazines have mostly receded to some shelves in the back and a few others underneath a counter, where James the cat often hangs out. "It came little by little because of the attrition of magazine and newspaper sales," Patel says.

"We had to expand," she adds. "There was a traditional candy store just like us on the Third Avenue corner, and they moved, and now they’re doing vapes and pipes and hookahs. That’s where the business is going." There are no CBD products yet, but there will be soon. Her father was even reluctant to add vapes initially.

There are also plans to simply be slightly more conscious about the store’s packaging. “We have these die-hard gypsy customers who come late at night. They want the glasses! So we’re making Mother’s Day baskets. Syrups, egg cream glasses, jelly rings. We have this community of people coming from all over the world. It’s a culture," she says. "It’s not as eccentric as the ‘80s, but if you want to see a true representation of what culture looks like, come late at night."

Late one recent night at Gem Spa, I was solicited by a man who declared he was running for president (along with everybody else). A week later, approaching midnight on another mild spring Wednesday, the neighborhood was decidedly not bustling. Between Cooper Square and 2nd Avenue, on St Marks’ main commercial drag, the Asian eateries did a brisk business. The East Village location of Barcade (6 St. Marks)—the former site of the infamous St. Marks Baths, as well as Kim’s Video and Music—remained hopping.

There were signs of the old Village too, like the kosher B&H Dairy (a few doors down from Gem Spa), the all-night Ukrainian diner Veselka (up a few blocks), and the dependable Ottendorfer Library (just across the street). At the former Polish National Home—once the site of the Balloon Farm, the Electric Circus, and later the All-Craft rehab center—an employee took out the trash from the upstairs tea shop. A group of street kids sat on the steps outside the 24-hour market with their backpacks, a seemingly endangered tribe in the neighborhood that was once their natural habitat. Outside Gem Spa, a man with dreadlocks sat cross-legged in front of Zoltar, facing Second Avenue and seemingly meditating, albeit with a cigarette in his mouth.

Business was slow at Gem Spa. James the cat perched inside the front door. One customer came in for a lone mallomar. The dreadlocked man disappeared. I consulted Zoltar on Gem Spa itself. “Have the patience to invest in something that you need and you will reap the lasting benefits,” the great and magnificent soothsayer suggested. The strawberry egg cream was delicious. 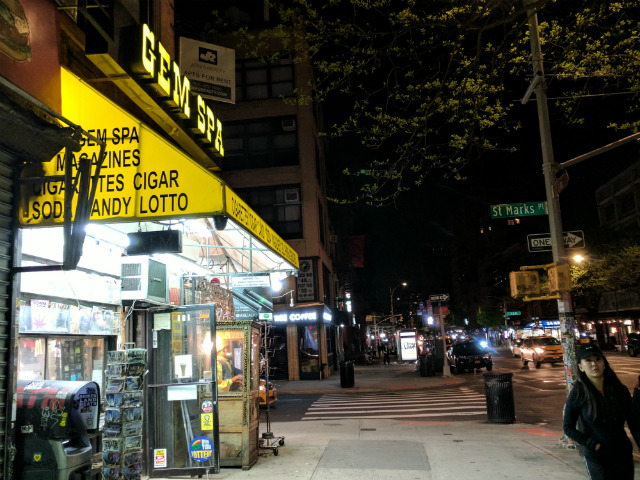 #east village
#gem spa
#st marks place
#original
Do you know the scoop? Comment below or Send us a Tip