Can Food Made By Mistreated Workers Be Kosher? 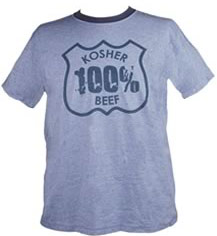 An overflow crowd packed an auditorium at Yeshiva University Tuesday night to debate whether it's acceptable to call something "kosher certified" if it's produced under unethical conditions. The panel discussion was prompted in part by the high profile prosecution of the Rubashkin family, who operate a major kosher-meat-processing plant in Iowa. Federal agents raided the plant in May, arresting 389 illegal immigrants, who, according to this damning cover story in the Village Voice, were paid some of the lowest wages in the nation, and were allegedly forced to work up to 17-hour days with 10-minute lunch breaks "in a freezing-cold, dirty hallway."

Reformist Shmuly Yanklowitz, a leader of what he describes as the Orthodox social justice movement, told the audience that he visited the plant in Potsville and met immigrant employees who "worked in hot, slavelike conditions from 7 a.m. to 10 p.m. so that we could have our kosher meat." Yanklowitz argued that "the consumer of goods produced immorally is morally culpable." But speaking to the Times, Rabbi Avi Shafran insisted on a strict interpretation of kosher, as laid out in the Torah:

Lapses of business ethics, animal rights issues, worker rights matters — all of these have no effect whatsoever on the kosher value...There is nothing in Jewish law that conflates the status of kosher food with the way the food is produced. What sticks in our craw is that [the reform movement] is following the zeitgeist rather than following the law. It falsifies the integrity of Jewish law.

But Shafran may not be able to keep a lid on this new wave of social activism led by young Orthodox Jews. Some propose adding a special seal of approval to kosher products whose producers meet certain ethical standards. And Shlomit Cohen, president of the student Social Justice Society, argues that "change is needed, and if it is not coming from the leadership we have, it will have to come from others."

#argument
#debate
#ethical
#jews
#kosher
#orthodox
#treatment
#workers
#yeshiva
Do you know the scoop? Comment below or Send us a Tip