Camera in the Kitchen: Roberta's 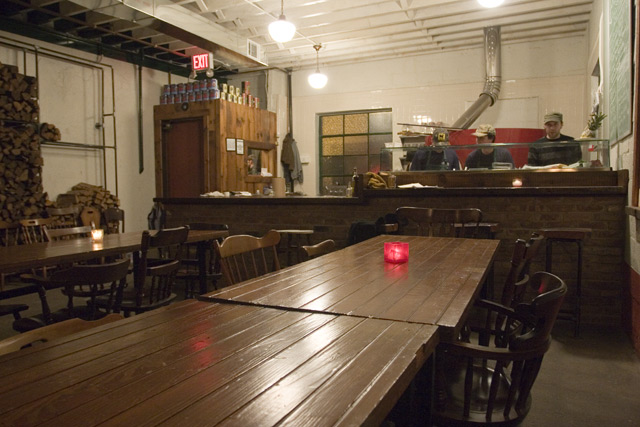 On Moore Street in Bushwick, you'll be hard pressed to find a better place to eat than Roberta's, the newly opened and very discreet wood-fired pizza haven. A fire engine red wood-fueled oven with the restaurant's namesake painted in white churns out thin and perfectly crispy pizzas (and the occasional calzone) for a spacious wood-paneled room with a cafeteria-table set up that still sports remnants of industrial garage doors.

Cash only, and BYOB, Roberta's dishes out delicious artisanal pizza in a neighborhood yearning for healthy, fresh food, as well as daily specials showcasing seasonal ingredients like roasted brussels sprouts with parmesan and guanciale (smoked pork jowl), which our waitress described as something we'd enjoy if we liked fatty bacon (obviously). The day's special calzone offered a satisfyingly crisp and slightly charred crust, coming stuffed with fresh ricotta, mozzarella, prosciutto, and grilled onions: an irresistible option for pizza-eaters who are especially keen on crust.

Pizzas range from the simplest – rosso, for $6, with just sauce and no cheese – to the chef's special pies topped with tuna belly, guanciale & egg, and the RPS (roasted peppers and soppressata) for $13, which came with a healthy share of meat slightly crisped by the heat. Paper thin, a single pie will only feed one (or two having a snack) so be prepared to pay a bit more buck for this bang. In addition to the five pies permanently on the menu, daily specials that mix and match from the gamut of toppings – capers, potato, egg, olives, tuna belly, and various prosciuttos among them – are highlighted on a chalkboard. 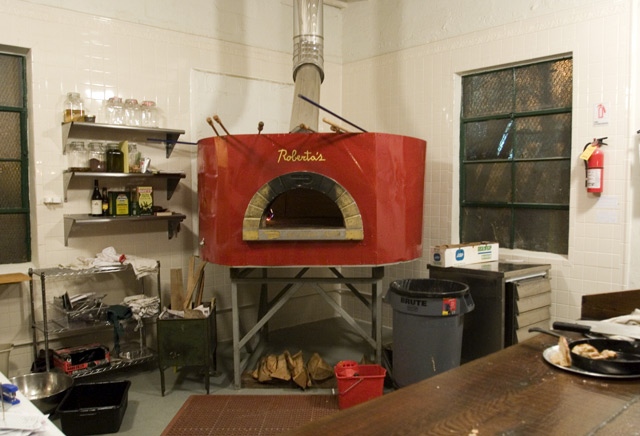 A casual, but attentive waitstaff is eager to chat and happy to hear feedback about your favorite pies. During our visit on a blustery Tuesday night, they also debated the various merits of deep dish pizza and then ventured to try and make one in their wood-fired oven, clearly enjoying the extra pies that are the perks of the job. Roberta's will probably have you talking about pizza too, long after dinner, or at least until the next time you return, for more pies, guanciale, and a place to hang out where you'll never feel rushed or crowded while you eat.

#brooklyn
#bushwick
#photo
#pizza
#restaurant
#review
#roberta's
#Wood fired
Do you know the scoop? Comment below or Send us a Tip