Camera in the Kitchen: Palo Santo 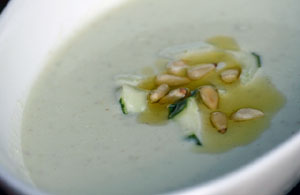 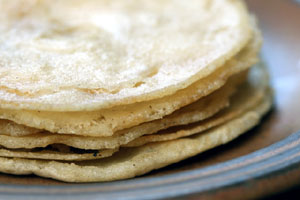 We mentioned Palo Santo when it first opened last summer, before the restaurant obtained its liquor license or even began serving dinner. Now that it has had a chance to hit its stride, we figured it was time to take another look.

To be honest, we've been to Palo Santo several times over the past year. We even took our mother there for her birthday. It's a gorgeous setting, with all the beauty of urban decay and none of the dirt. The talented chef, Jacques Gautier, made those tables of found wood and assorted interesting objects himself. The very cobblestones built into the restaurant's striking exterior were salvaged from nearby 5th Avenue, where they had been unearthed and then tossed aside by Con Ed.

The food is spectacular. It claims to be "eclectic latin cuisine," and while we're not sure precisely what that is supposed to mean, we're all for it. It definitely involves a lot of seafood, spiciness, and a constantly changing menu. 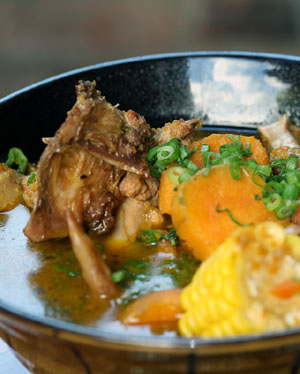 The sancocho was a stew of chicken (dark meat, still on the bone, corn (on the cob), carrots, and unborn eggs, among other things. As you might imagine, it was a challenge to eat, but we certainly did our best. The broth was very rich and satisfying, though we would have skimmed off more of the fat had we made it ourselves.

The dish that stands out in our mind from when we ate at Palo Santo last winter is the small serving of tongue, spicy mango, and guacamole taquitos. We still sometimes lie awake at night, hoping they someday bring that dish back.

The only area where Palo Santo falls short is dessert. We've tried several of their desserts, from the panna cotta to the lime pie, the chocolate mousse to the tart, cheesecake-like sorrel flower pie. They're fine, but not quite up to the high standard set by the savory dishes. We like to see this as an excuse to order more appetizers instead.

If you have the time, we strongly recommend braving their secret tasting menu (but don't snitch on us for telling you about it!). It's not on the menu, but if you sit at the bar by the open kitchen you can order the tasting menu for $45 per person. When we tried the tasting menu, after the 8th course we had to ask the chef:

"Is there a set number of courses to this tasting menu, or do you just keep going until we cry uncle?"

He shrugged and smiled at us. "Not really. Are you getting full? Maybe just a light salad and then a few desserts?"