Camera in the Kitchen: Mole 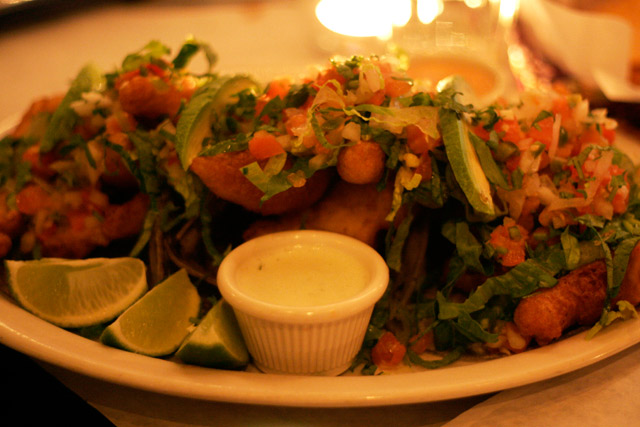 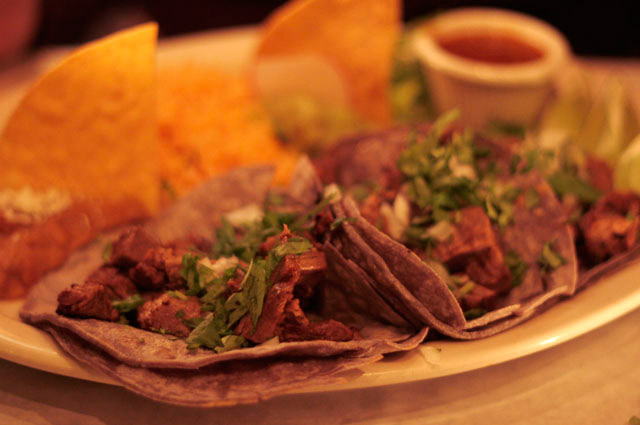 On a frigid night this week, Gothamist and two friends decided to duck out of the cold and pop into Mole, a twenty-five seat Mexican spot on Allen Street owned by the husband-wife team of Nick Cervera and Lupe Elizalde, also proprietors of Taco Taco in Yorkville. Strung with lights out front, and decorated inside with colorful Mexican tiles and exposed brick, Mole is cozy, but has an extensive menu with specials changing nightly.

Our at times over-eager waiters quickly brought over fresh chips and a smoky salsa, and we started with the tamal mole, a chicken tamale steamed in a fresh banana leaf, saturated with the restaurant's namesake sauce. We have to admit: it's one of the best tamales we've had in the city. Savory and sweet, rich but not heavy, the corn base a coarse dough with tenderly spiced chicken.

The pozole, a traditional pork soup made with hominy got kick from a squeeze of lime, and a giant platter of taco de pescados (fish tacos) was enough to serve two, with leftovers. The fish was flounder, battered and lightly fried, topped with shredded lettuce, avocado, tomato, lime, and cilantro on blue corn tortillas. One dining companion remarked that the fish was "like butter," and even better with the accompanying chipotle sauce and a chunky side of guacamole ($3) with a distinct citrus flavor. Another dining companion opted for tacos de carne asada, tender braised beef tacos that came with standard sides of rice and refried beans.

With entrees under $20 and giant portions, Mole is a new go-to Mexican spot that's a touch fancier than nearby favorite, Festival Mexicano. While no longer BYOB, the drink menu offers a handful of wines, cocktails, and beers, and if you have room for dessert, the pastel tres leches (three milk cake) is rumored to be memorable. If you happen to go when it's still this cold out, make sure to ask for a seat away from the door; the draft can carry in and you might find yourself shivering over your tacos.

#allen street
#gothamist
#houston
#Lower East Side
#Mole
#restaurants
#the city
#this week
#yorkville
Do you know the scoop? Comment below or Send us a Tip