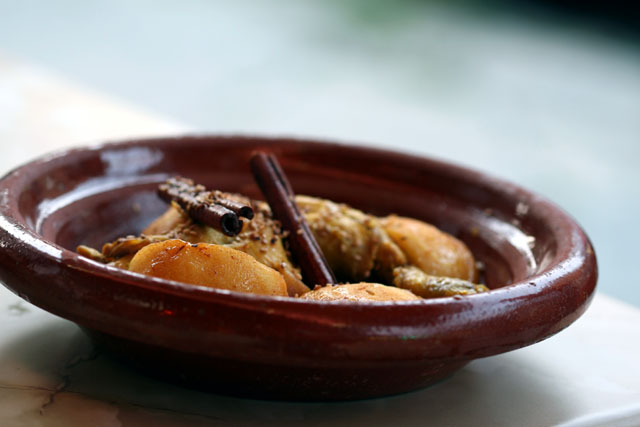 At La Maison du Couscous, we never get away with ordering the first menu item we choose. Everything on the menu is available, of course, and in the back Fatima is ready to throw together whatever sweet, meltingly rich food we want. Still, the manager/waiter, in a burst of excited conversation, always insists that he knows best.

We try to argue, but his passion about his food overwhelms us every time, and we let him lead us wherever he likes. He has always taken good care of us. When we went back to take photos for this post, he even retrieved his tripod from downstairs to help us out.

The menu is constantly on the verge of being reprinted, so pay attention to what he tells you. When we tried to order the Chicken Kdra, a stew of chicken, chickpeas, smen, lemon, parsley, and saffron along with a side order of plain couscous, he insisted that we try the Couscous Maison instead. We tried to explain that we craved chickpeas and smen and hated pineapple, and were reassured that we would get everything we wanted.

We ended up with a lamb shank braised to perfection in a stew of several sorts of raisins, chickpeas, figs, onions, apricots, and prunes. The onions are cooked with cloves and raisins for four hours as they slowly melt down into a flavor that we find adds just the right sweetness to La Maison's tagines.

We also ordered the Atlas Tagine, as seen in the photo above. The Atlas is a tagine of chicken with green apples and cinnamon. As we sat at our outside table waiting for the food, our glance fell upon the green apples stacked high at the grocery store across the street. A moment later, La Maison's manager ran across the street and purchased a few of those apples for our tagine.

His company is almost as much of a draw as the food. Running a restaurant is more than a business for him. It's a passionate hobby, like his love of photography and cycling. It's hard to keep up with him, but we imagine that Fatima matches his energy with her own in preparing the food in the back. 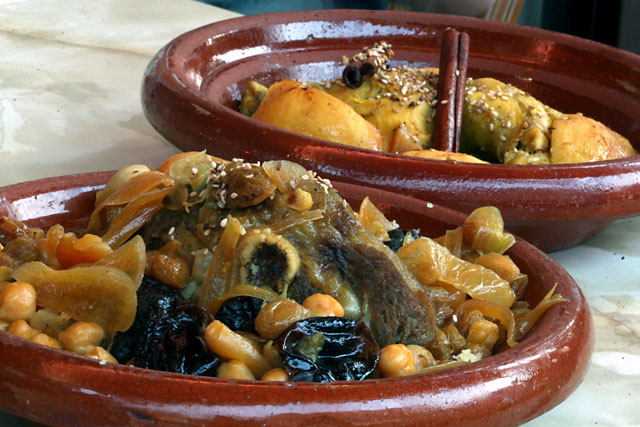 We like to start with the kofta cigars and a trio of salads. The kofta cigars are filled with wonderfully spiced lamb, but what really makes them for us is the wrapper dough. We imagine that it must be actual warka, stiffer and thicker than the phyllo many restaurants use, with a satisfyingly firm crunch.

We end each meal with a pot (or two or three) of mint tea, intensely sweet without being overpowering and perfect for lingering over long into the night. We've learned to pour it properly, a thin stream of tea from high above so that it can cool slightly on its way to our glasses. The waiter still refuses to let us pour it ourselves unless he recognizes one of us as capable of doing it right.

A few of our other favorite dishes are the Tarodant tagine (chicken in a thick honey cinnamon tomato sauce), the lamb tagine with artichoke hearts and green peas, and the chicken tagine with sweet caramelized onion and golden raisins. It doesn't matter what you order, though. Everything is delicious, and your waiter is intensely interested in making sure that you have the best of all possible meals.