Camera in the Kitchen: Kunjip 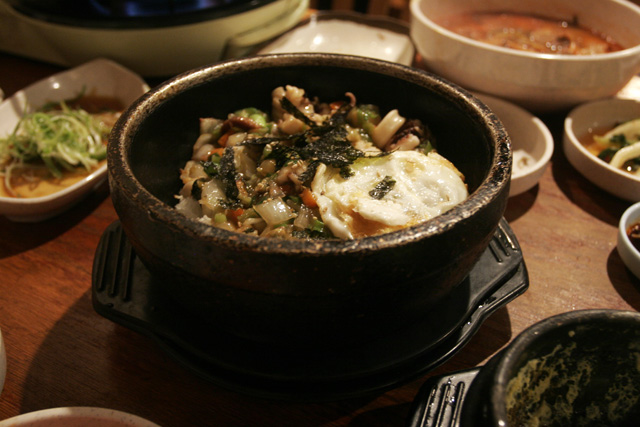 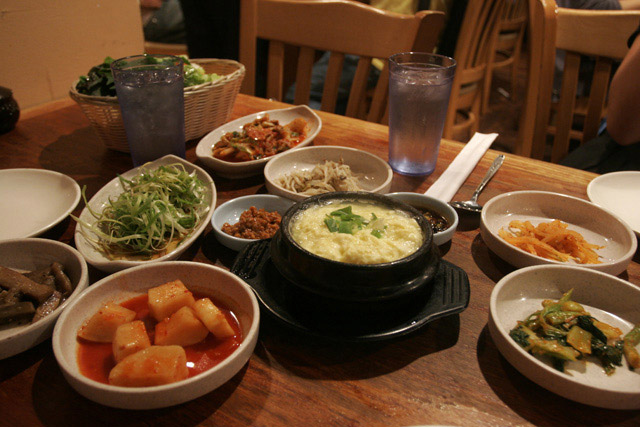 Kunjip might be a misleading name for a small low-ceiling Korean restaurant that translates into “big house” in English. Big or small, Kunjip, a 32nd street K-town fixture, is nearly always packed—and mostly with Koreans. Service is brusque—non-existent really--starting from the moment you are shoved menus (one with pictures, another written) about the variety of stews, rice dishes, grilled meats, noodles, and myriad soups—while you’re still waiting in line for a table. Before even being seated, it’s likely your food order will be taken, and those unfamiliar with Korean dishes are only pressured to make up their minds quickly.

When your table is nearing ready, the waitstaff sends you to hover over the not-yet-finished diners. The restaurant is crowded—a hubbub of barbequing meats, panchan (small dishes) flying back and forth with eggplant, several types of spicy kimchi, egg stews, sprouts, which also arrive at your table literally seconds after taking your seats (these fifteen or so small dishes come with every meal). While not conducive to conversation, if you’re hungry, no fear, you’ll eat the moment you sit down.

Gothamist ordered all dishes to share, since portions are large and flavors are best when spices and sauces mix together. We ordered the dolsot haemul bibimbap, steamed rice with mixed vegetables and seafood with comes in a piping hot stone pot with a sizzling egg on top. Vegetables, rice, and seafood are mixed together (add a bit of hot sauce if you’d like), for a delicious in-mouth fiesta of spice and flavor. The secret to eating dolsot bibimbap—which is nearly impossible to make at home (though we’ve heard there is a home version of the stone pots), is to the rice crisp and caramelize in the bottom of the bowl letting it become sweet and textured. Bibimbap is also available vegetarian (one of the few veggie options) or with beef for the seafood averse.

No trip to a Korean restaurant is complete without grilled meats—and popularized Korean restaurants are often referred to as “Korean BBQ.” Kunjip uses portable tabletop flames rather than built-in ones, bringing marinated meats straight to the table and pumping on the flame seemingly without precaution. Worth it for the spectacle, but also for the flavorful beef, our favorite is Kalbi, or short ribs marinated with rice wine, soy sauce, garlic, sesame oil, sugar, and sometimes a fruit juice (often Asian pear juice).

On rare occasions, even without the service, a restaurant's food can still win out; fortunately over at Kunjip, the cuisine is still the king of the house.

#food
#gothamist
#pictures
#soups
Do you know the scoop? Comment below or Send us a Tip