Camera in the Kitchen: Bun Soho 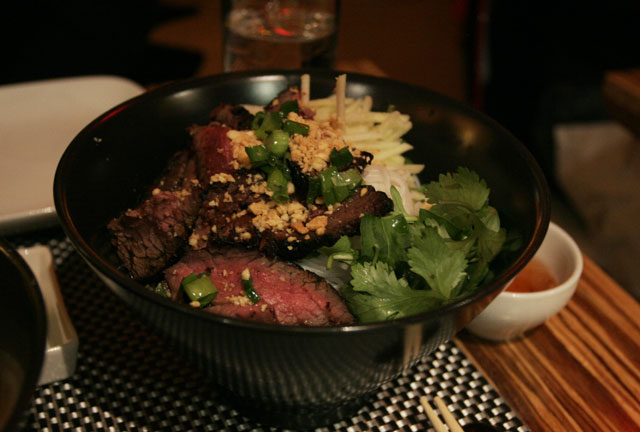 Bun -- Vietnamese vermicelli noodle based dishes (both cold and hot) --usually take a back seat to the more popular pho noodles in the United States. But, at Michael “Bao” Huynh’s new restaurant collaboration with Warren Cuccurello, Bun Soho, bun are the show-stoppers on a menu that also offers small plates rife with seafood dishes and plenty of pork belly. Dishes are $12 and under—even for duck hearts and tongue confit — and co-chef Huynh, who cooks with his wife Thao Nguyen — throws in refreshingly sweet and fresh flavors like Asian pear, plenty of mint, coconut parsnip puree, fennel, and quince.

On a recent night, Gothamist and a friend stopped in to try the signature bun, and opted for one with broth, and one without. The steak in the spicy hanger steak bun was perfectly pink in the middle, well seasoned, moist, and flavorful. Offset by crisp apples, mustard greens, and a handful of mint, and a side of fish sauce for marinating the noodles were copious, but light. We also shared a bun with seafood-filled broth, full of white fish, shrimp, crab, and heftier rice noodles. The seafood, ladled out went well with a squirt of lime, which came on the side.

Although tables were crowded together, service was amicable if not especially attentive. Food arrived in timely manner, and flavors were fresh and surprisingly refreshing. We’ll definitely be heading back down to Bun Soho soon for both the food and its affordability.

#food
#gothamist
#grand street
#michaelhuynh
#restaurants
#soho
#Thao Nguyen
#united states
Do you know the scoop? Comment below or Send us a Tip