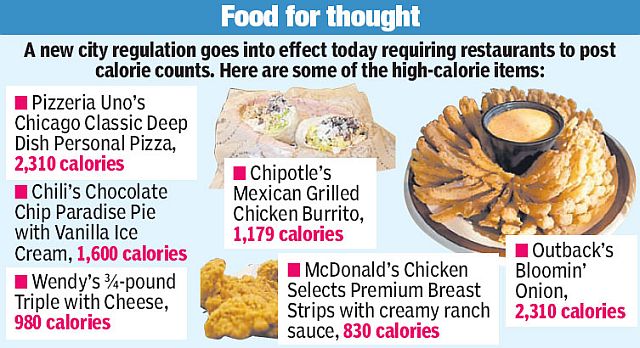 The New York State Restaurant Association [NYSRA] is still fighting a law requiring chain restaurants operating in New York City to prominently display calorie information on all food and beverages, but the new rules go into effect today anyway, and some establishments – such as Starbucks, Subway, Chipotle, Auntie Anne’s, Jamba Juice and Chevys – are already complying.

Not playing ball are places like McDonald’s, Burger King, KFC, Domino’s, Pizza Hut and Taco Bell. Is it because, as the NYSRA argues, the new law violates their First Amendment rights? Or could their resistance have something to do with the fact that a restaurant like Taco Bell sells a Border Grande Taco Salad with Taco Beef which has 1,450 calories – almost 3/4 of the FDA’s recommended allowance of 2,000-calories per day.

The Post has an informative breakdown of some of the biggest high calorie items that fast food chains would just as soon keep to themselves. Any city restaurants with more than 15 locations nationwide now have six weeks to comply, after which they will be subject to fines of up to $2,000. In the meantime, the NYSRA is expected to appeal to a higher court.

The Health Department argues the new rules will prevent 150,000 New Yorkers from becoming obese and, over the next five years, they could save 30,000 people from developing diabetes and other health problems. And according to a Times editorial in favor of the rules, New Yorkers gained 10 million pounds over the last two years, disproportionately in poor and minority neighborhoods, where many of the 10 million chain-restaurant meals sold each month are consumed.

#board of health
#calorie information
#calorie regulation
#city
#fast food
#health
#mac
#new york
#new yorkers
#obesity
#the city
Do you know the scoop? Comment below or Send us a Tip