Call It The Battle of Brooklyn Pizza's Two Johns 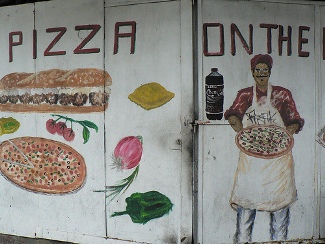 Today's new and narrow NY Times Metro section features a battle over pizza propriety. The Times reports Papa John's Pizza is opening right next door to Johnny's Pizza, a 39-year-old Sunset Park institution. John Miniaci Jr. whose father started the pizza parlor in 1968 is none too happy about this development and not just because Papa John's is a blight upon the very word pizza: Miniaci's father died just a month ago. In fact John Jr. knew about the franchise's plan to move in before his father died, but couldn't bear to tell him.

This isn't the first time a national chain has wrangled with the borough whose very name is synonymous with great slices. We all remember Domino's abominable Brooklyn Style Pizza and its equally abominable ad campaign with its caricature-like portrait of life in the County of Kings. But this new Papa John's franchise is quite literally too close to home. Thankfully residents of the tightly-knit community are not taking battle of the two John's lying down.

A petition “to stop the establishment of Papa John’s in our neighborhood.” has been signed by more than 2,000 folks and sent to the company's headquarters in that bastion of fine pizza, Kentucky. Many of those who signed the declaration are owners of nearby rival pizzerias. Here's what one told the Times:

“If we get short on cheese or tomatoes, we go to him or he comes to us,” said Gino Campese, the owner of Scotti’s Pizza. “When it’s time to raise prices, we get together. There’s room for everybody. But not for Papa John’s.”

Ouch! And aha, possible pizza price collusion - so that's why lots of pizza places manage to raise prices at the same time. Do the pizza owners also discuss raising prices with the MTA?

What kind of pizza places do you frequent - the mom & pop-type pizzerias or chains like Domino's and Papa John's? And is Famous Original Ray's a chain?

Photograph of a Coney Island mural by motormel on Flickr