New Yorkers hear the argument from Californian refugees all the time: "You can't get any decent tacos in New York City." These poor ex-Angelenos have never put a Brooklyn Taco to their lips. Before this fall, you could only snag one at the Hester Street Fair or the Artists and Fleas fair in Williamsburg, but now you don't have to wait for spring. We paid a visit to Brooklyn Taco's first permanent location in the Essex Street Market, and as sad as it was to see Jeffery's Meat Market leave, the neighborhood now has sublime tacos just steps from 5 subway lines, 7 days a week.

Co-owner and Maialino alum Jesse Kramer told us that much of their produce used is purchased at the market, and when next-door neighbors Heritage Meat Shop have goat in stock, expect goat shoulder tacos. "We like to switch up the menu as much as we can to keep things fresh," he said, adding that when it actually gets cold they'll add soups, and in the summer, frescas. Lunch business has been steady, but weekends are the busiest. "We're trying to pick up a brunch crowd with our breakfast tacos."

We're not sure how a "crowd" would fit in the space: it's a few stools under a bar that's next to the kitchen itself, but that's a traditional tacqueria: efficient, packed, and cozy. Our Chipole'd Chicken taco was exceedingly moist, and we had to pause several times to prevent ourselves from completely inhaling it. The Cholorio Brisket taco, made from a 4-hour braised brisket in authentic Sinaloan sauce, is Brooklyn Taco's flagship. Red onion, mango, and a dusting of Brooklyn-made cotija cheese blend perfectly with the juicy, spicy brisket: it's simple, and potent.

For vegetarians there's the Guaco Taco, which is essentially Brooklyn Taco's tortilla-wrapped, supremely fresh take on guacamole; and when we arrived, black bean and cheese tamales. As a shameful Trader Joe's frozen tamale-junkie, we were fools for not ordering the real thing. Piping hot, we watched a customer devour the gooey tamale it in a minute flat.

At as much as $4 a taco, the joint isn't cheap. But excellent food rarely is, and these tacos aren't the dainty bites you might pick up from a truck for $2—they're two-tortilla masterpieces. If you're drinking a bottled Coke (yes, they really are better) a solid lunch comes to $10. With business steady and catering booming, we asked Kramer what was next. "Brooklyn. I think Brooklyn's due for a location." Californian taco snobs take heed: it's almost 60 degrees in December and you can eat amazing tacos. Welcome home. 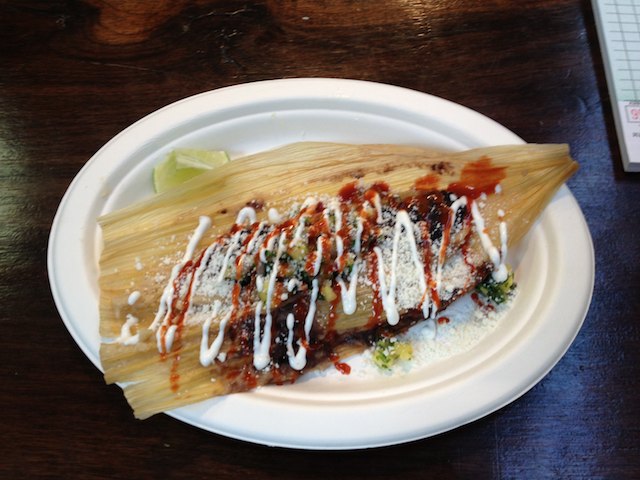