Our latest installment of Quick Bites brings us to a new hot dog spot that's here for the summer.

THE VIBE
Dog Haus is one of those large, much-loved chains—there are about 30 of them out west, mostly in and around L.A.—that, frankly, I had never heard of before last week. That's when news hit that these purveyors of complicated sausage sandwiches were coming to New York for the summer. Their host for the season is Chefs Club Counter, the awkwardly-named space that, among its many guests since it opened in 2017, gave Alvin Cailan of Eggslut a showcase for his stuff last March; he has since decided to open a permanent place in NYC, and I imagine Dog Haus is testing the big city waters as well.

On opening day they were giving out free hot dogs, and for hours there was a line around the block, a feeling of excitement in the warm summer air. On evening two and three of their summer-long stint, however, I was one of maybe three or five guests here. And while the crew has thoroughly branded the corner space with stickers and signage and cheeky attitude, there's no escaping the fact that the actual, physical room has the bland character of a corporate cafeteria. The rickety metal outdoor tables on Lafayette, while less comfortable than the cushioned seating inside, offer a much more interesting view.

Chefs Club is a counter-service place, and the person taking your order can help you figure out the menu (there are several steps to each sandwich), and will give you one of those number-flag signs to place wherever you feel like sitting. A runner brings your meal, chef Ilan Hall makes the rounds now and then, and the whole operation is quick and efficient. 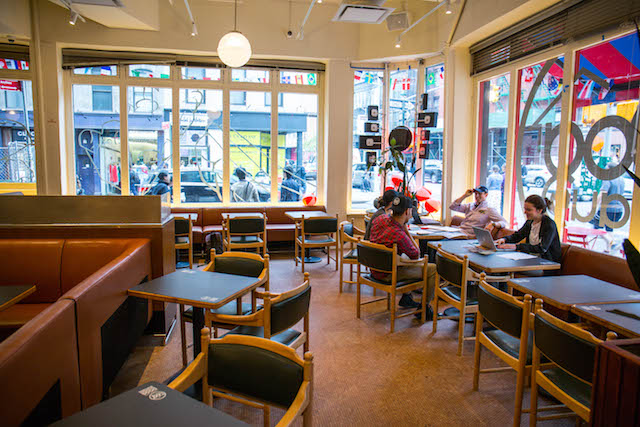 THE BITES
Almost everything at Dog Haus is oversized, sloppy, and involves about three more ingredients than perhaps is necessary. I wanted to try the baseline Beef Hot Dog, for example, but even though the tube steak, when isolated, was thick and juicy (if a little bland), it was completely overwhelmed by the "build." I chose the Little Mule version, which meant the dog came buried under melted white American cheese, avocado, pickled jalapenos, cotija cheese, chipotle mayo and, for no real good reason, a runny fried egg. As you can imagine, even bundled in a fluffy King's Hawaiian roll, this was impossible to eat without everything spilling all over the place.

I also ate the Thai Red Currywurst—the meat here is all hormone, and antibiotic-free, by the way—which had a nice kick to it, and the "One Night In Bankok" build seemed like the obvious way to go. It tasted good, with plenty of strong flavors (in addition to seasoned meat you also get red curry sauce, som tum slaw, kaffir peanuts, Thai basil, and pickled jalapenos), but it's tough to tell what's going on in any given bite. The Cheesburger suffered a similar fate, though the relatively modest toppings combo in the Sooo Cali build—arugula, avocado, tomato, crispy onions, spicy basil ailoli—actually perked up the rather lifeless, too-well-done patty.

The simple side of Tots are terrific, cooked just right and seasoned with restraint. Skip the Banh Mi Poutine though, one of those Lies My Menu Told Me dishes in which the promised "crispy fries" were anything but. Flacid spicy pickles, flecks of grated cheese, and unadvertised strands of sweet meat also joined the potatoes in a puddle of weird hoisin gravy. The single best thing at Dog Haus is the superb Salty Malty milkshake, a thick, deeply-satisfying caramel treat (the crunchy dulce pearls are the clincher) that's worth walking out of your way however many blocks it takes when you're in the area this summer and feel like a cold one. 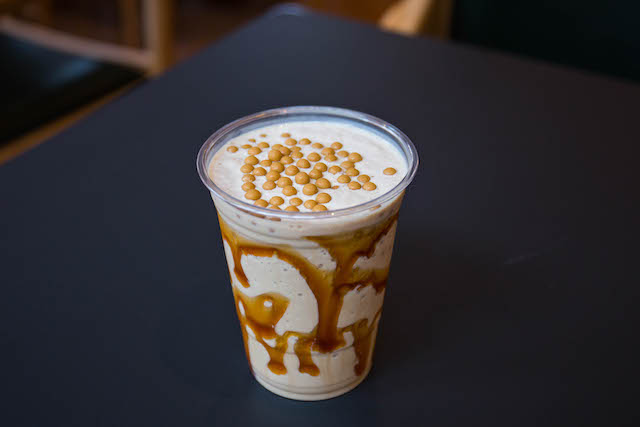 THE VERDICT
Sorry Dog Haus. New York City already has a wide assortment of first-rate franks, and though we will always welcome newcomers of all sorts, you need to do more than just pile a bunch of stuff on top to win our hearts.

Dog Haus will be at Chefs Club Counter, 62 Spring Street at the corner of Lafayette, through September (646-438-9172; nycmenu,doghaus.com)

#dog haus
#quick bites
#soho
#original
Do you know the scoop? Comment below or Send us a Tip