If you're addicted to the stoner comfort foods at Williamsburg's Commodore, take note: the owners have opened a new spot over in Bushwick—El Cortez—doing a similar retro drinks menu and some seriously delicious grub. Like their other spot, owners Chris Young and Stephen Tanner have recreated elements of bygone years, from the classic TVs playing a loop of films—Weekend At Bernie's II last time we were in—but this time with a tip of the hat to Mexico and a splash of tiki thrown in the mix as well.

"Kind of the same Escape from New York thing (not the John Carpenter movie)," Young told us of the vibe they were seeking. "I spend all my time in Brooklyn so when I go out I kind of want to forget about it and feel like I could be anywhere else, preferably near a beach." To that end, guests are greeted by a building-sized tiki heralding them from the mostly industrial block of Ingraham Street. On one wall, a Mesoamerican pyramid—with ominous black helicopters circling it—with cacti and Southwestern-esque motifs competing the mural.

Across from it, the main bar, blending, shaking and pouring up potent tiki drinks like a Zombie packed with rum (including Bacardi 151), lime and some sweet stuff and the Orange Julio, with gin, elderflower liqueur, Aperol and freshly squeezed OJ. You can also snag a Busch for $3.

It's unusual to hear someone "crave" a Taco Salad ($11), but after devouring the version offered here, we're definitely thinking about it an inordinate amount. A giant, fried tortilla bowl gets filled with seasoned ground beef, beans, tomatoes, shredded lettuce, black olives and cheddar cheese, then topped with a dollop of sour cream and a scattering of green onion. They're also stuffing many of the same things inside a tortilla and deep frying it to make their Chimichanga ($10), a gut buster if ever there was one.

"The menu's not all Mexican and not particularly focused on any one style of Mexican," Young says. They're also doing a Cheeseburger ($7), Chicken Sliders ($11) and a Cucumber Salad with cornbread ($7)—but Mexican is the thrust of the menu, which also includes their addictive queso in several forms and a Burrito ($8/$9) that "Stephen’s been kind of obsessed with perfecting."

On busier nights, head upstairs for the second, Tiki-inspired bar with a killer soundsystem or visit the outdoor space when the weather holds out. Right now, there are DJs six days a week (every night except Monday), including Miami Players Club, Scott Z (Macho City-Detroit), Eli Escobar (Tiki Disco), Kat Daddy (Ballers Eve), and Large Professor. And unlike Commodore, there's table service, so you won't have to negotiate with strangers for a table during busier hours. 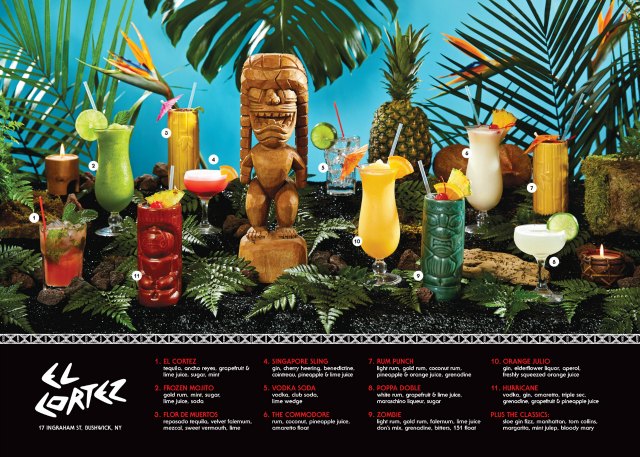