The latest in our Quick Bites series brings us to Bushwick for a pizza party...

THE VIBE
Kristen North and Paul King, owners of creative force behind the Bushwick bar Boobie Trap—in case you haven't been, the theme, relentlessly repeated, is breasts—aren't known for their restraint. So when they took over the semi-generic pizza spot Verde Coal Oven across Irving Avenue from Boobie earlier this year, you knew a major overhaul was coming.

Bushwick Pizza Party, which opened a couple of weeks ago, keeps the century-old oven that's embedded into the building's foundation, and pretty much nothing else. This is a pizza party as imagined by a 10 year old, circa 1988, if she or he had access to booze. The space is crammed with nostalgia-bait toys, movie posters, Garbage Pail Kids, action figures, 8-bit Mario stickers, games, Super Soakers, saturated colors, neon signs, lava lamps. The laminated menu is bookended by a VHS classic; I got Now and Then, which was released in 1995, and depicts the 1970s. Yes, there are anachronisms.

Magic 8 Balls are on every table. You walk through a painted beaded curtain to get to the bathroom, where you'll find a dozen toilet paper options and lots more Mario and Goomba decals. The music mix is mostly Guns 'n Roses and Madonna, with the odd Def Leppard or Bon Jovi tune thrown in. You can build Legos (and/or charge your phone) at the bar. 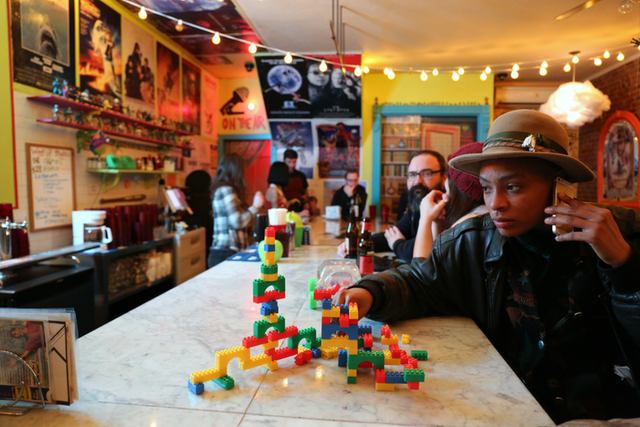 It all works and is actually fun because 1) it's totally over-the-top; North and King double-down on the concept, and then double-down again; and 2) no one, not your fellow pizza partiers nor the staff, makes a big deal out of any of it.

THE BITES
The Pizza Party menu has nine cutely-named pies, including one nightly special (whatever Brent in the kitchen feels like doing), and all sorts of toppings if you'd prefer to go the build-your-own route. The pie style here falls somewhere in between the chewy/blistered/wet-centered Neapolitans you find everywhere these days (Motorino, Keste, GGs, et al), and the crispier, "cracker" texture of, for instance, Marta. It feels a bit tentative... did he take this out a smidge too early? Or leave it in too long?

The toppings, too, are also—and surprisingly, given the crazy-train room you're sitting in—somewhat restrained. I had the God Hammit, which hypes up "spicy pepper jelly" in its description, but is much more about the ham and ricotta. Those aren't bad things to eat by any means—really, this was a tasty, if slightly too sweet, pie—but I also kind of wanted to come on feel the noize.

My other pie was a bit bolder, the Go to Kale!, which you think is going to be their "healthy" menu item until you realize the dominant ingredient is bacon. Also making an appearance: more ricotta, this time of the "spicy carrot" variety (this was genuinely kicky); pesto, sauteed onions, winter-y tomatoes, and nicely bitter bits of kale.

The Pizza Party menu also has a few sandwiches, such as the Big Old Chicago Dog! ("no ketchup, sorry dude"), and The Royale With Cheese. Among your beer and wine choices (and drinking is definitely encouraged), are Sochu shots and cocktails, and 40s of PBR for $9.

THE VERDICT
Locals, certainly, should check this place out, and it's an ideal date spot for a certain kind of couple, conversation-starter-wise. It's also open late, serving food until 4:00 a.m. on the weekends.

And while the pies in and of themselves aren't necessarily destination-worthy, North and King definitely succeed in delivering on the PARTY part of Pizza Party. Hop on the M to Knickerbocker or the L (or M) to Myrtle/Wycoff and bring a crew. And if you get tired of playing with all the toys, Pizza Party's hot older sister Boobie Trap is right across the street.

Pizza Party is located at 254 Irving Avenue, between Bleecker and Menahan in Brooklyn.

#bushwick pizza party
#quick bites
#original
Do you know the scoop? Comment below or Send us a Tip