A Bushwick KFC has been offering customers a groovy free "side" with their mind-blowing poultry and biscuits. "10 PCMEAL/ FREE LSD," the sign at the Bushwick Avenue and Myrtle location tantalizingly promises. But is the offer of gratis psychedelic revelation and tasty fried chicken too good to be true? This morning I took a trip on the J train to find out.

Upon reaching the KFC counter, I asked the first employee who made eye contact, "Do you have free LSD?" Met with a confused smile, I pointed to the sign outside and asked what the "LSD" stood for. She speculated that it stood for "Large Side Order," but... wouldn't that be LSO? Now we were both confused.

A cook emerged and I asked him about the free acid, but he didn't know what I was talking about, so he walked outside with me and immediately started laughing. The cook assured me that they don't give complementary drugs with a 10 piece meal, adding, "Well, now I know why so many people have been taking pictures of this place."

The cook withdrew into the back room to procure the necessary lettering to edit the sign, and, as I stood outside taking photos, an unamused manager approached. "Do you have any common sense at all?" the manager asked. I insisted that I do, and asked him to clarify what "LSD" stands for. "Large Side," he said. But that still was a little confusing, so I pressed him for a more specific explanation.

The manager proceeded to spell the word "side" for me, explaining that the "L" stands for large, the "S" for side, and the "D" stands for the "d" in siDe. "We're in food service," the manager explained. "We have our lingo and the people who buy our food know what it means."

Nevertheless, the cook came out from the office with more letters to clear up the miscommunication. The new sign reads "FREE LRGSD." Much better. 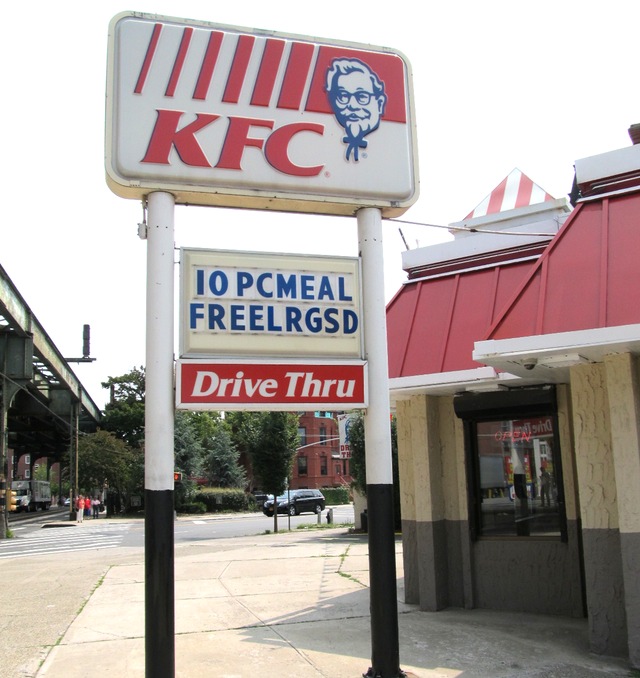 At this point the manager became a little more lighthearted about the whole thing, and asked me how I even know what LSD is, because "that stuff was popular before you were born." I agreed with him and asked, "So can I try some for free inside?" He said yes. (To be clear, he was joking, and you still can't get free LSD at KFC.)