Bushwick's rents and property values have been skyrocketing over the past few years, a phenomenon that's understandably distressed longtime and even newer residents. Unfortunately, though, someone manning the Instagram account for a local coffee shop took out his or her frustrations with the Bushwick real estate scene by going on a multi-paragraph rant about "the Jews" and their "greed and dominance." And it only got 23 likes! Haters are slipping.

Brokelyn spotted the Instagram, posted to the account of The Coffee Shop this morning, just a few days before Yom Kippur. It was still up as of 11 a.m.:

In case it's gone soon, here it is in its full glory:

Ok, what I REALLY want to talk about is how to consider the Jews (oh yes, let's talk about it) who want a piece or all of Bushwick. My stubborn Bushwick-oroginal neighbor is a hoarder and a mess- true.. and he's refused selling his building for lots and lots of money. His building and treatment of it makes the hood look much less attractive and I would like him to either clean up or move along. BUT NOT be bought out by Jews however, who in this case (and many cases separate- SORRY!) function via greed and dominance. A laymen's terms version of a story would simply be- buying buildings, cutting apartments in half, calling them luxurious, and ricing them at double. Bushwick IS rising and progressing, and bettering, but us contributing or just appreciating this rise and over all positive change do not want to be lumped with greedy infiltrators. Two jewish young men with generally rude behavior (one more than the other) ordered coffee, and explained how they were looking for this neighbor of mine. I knew what was up and asked where are they visiting from. When asked where I'm from I firmly and confidently said "HERE. This is my neighborhood, it's where I come from." They began to lighten up and almost kiss as a bit. I openly said "looking to buy the building?" They said yes and I explained how this man has been asked to sell for large amounts of money many times- which is true. So I said "Good luck with that. But if you're going to come here ya gotta be nice". If you know me you'll know what my eyes looked like. You know!- when they have the look of death within them. They one guy smiled. And they both knew where I stood. The one who had a slightly more aggressive behavior let that go fast after our initial meeting n which they experienced my confidence... and then at the end gave me his card and asked if I'd contact him when I see my neighbor. He said.. and I quote "I'll treat you right" Whatever exactly that meant. But I did say if you come here you have to be good. We'll see what happens from here. 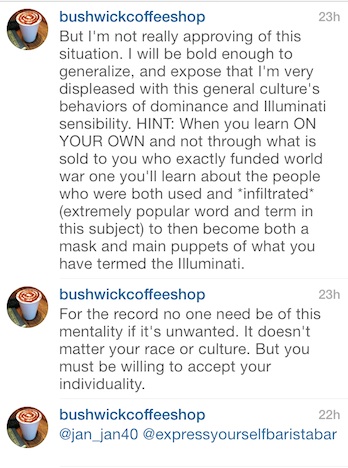 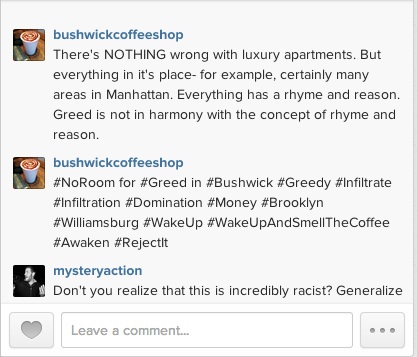 And called attention to landlords who are being "bigoted by Jews": 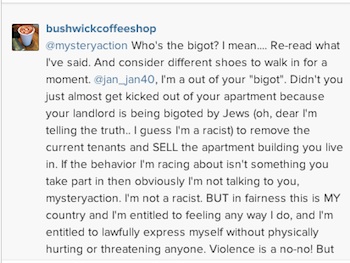 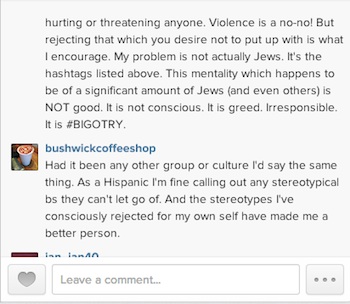 The Coffee Shop, which is located at 203 Wilson Ave near Stanhope Street, was opened over the summer by Michael Avila, a Bushwick native who spent his formative years in Kew Gardens, Queens. In an interview with DNAinfo, he said he was inspired to launch The Coffee Shop in his old neighborhood once health stores and other new businesses started moving in, not that coffee shops aren't the 4th Horse of the Gentrification Apocalypse or anything. 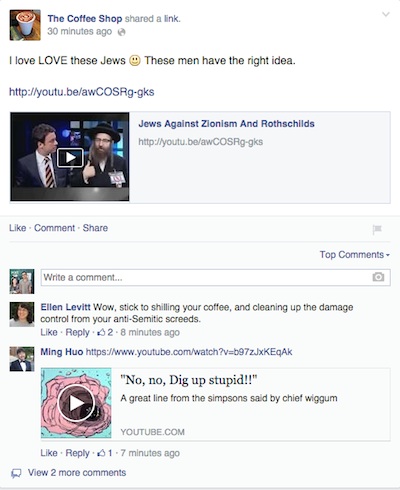 #antisemitism
#brooklyn
#bushwick
#jews
#the coffee shop
Do you know the scoop? Comment below or Send us a Tip