Forget Mr. Softee, or even Milk Bar—Dominique Ansel’s new burrata soft serve is the only ice cream you’ll need this summer. This morning marked the grand opening of his West Village ice cream counter, which is nestled in the corner of 7th Avenue’s Dominique Ansel Kitchen. The rain and chill were not enough to keep dessert fanatics at bay, though the cheery caramel and citrus flavors that topped each cone made things feeling like summer regardless. Attendees (and the Cronut creator himself) will be dishing up soft serve until 9 p.m, or until supplies run out. But knowing the baker’s dedicated following it might be a good idea to get there early.

Along with the deservedly hyped burrata, the counter is offering Gianduja, a chocolate hazelnut flavor with an orange mist. You can also indulge in both flavors at once in Ansel’s gourmet take on the classic chocolate and vanilla swirl. We tried out each option just to be safe, and can confirm that they’re both delicious.

First up was the burrata, which was almost too pretty to eat, in a pale cream color with splashes of gold balsamic caramel and tiny green basil leaves. Any doubts about eating cheese flavored ice cream were immediately put to rest, with the hints of buffalo milk lending itself to more complexity than a traditional vanilla. The balsamic caramel kept things lively with an unexpected tang, and the basil leaves brought it all back to that original savory/sweet dynamic. The best part? An entire confit strawberry hidden in the bottom of the chocolate-lined cone.

The Gianduja, a safer choice that’s closer to a simple chocolate, will definitely be the first pick of the Nutella-obsessed, but Ansel’s riff on Italy's spread is definitely subtler. The sea-salt and orange mist, which the counter team sprays on after filling the cone, acts in a similar way to the burrata’s caramel, offering a sour citrus taste to cut past all the sweet. Salted hazelnut brittle tops the cone and ends it, with chunks lining the bottom. If it wasn’t obvious enough by the rich, creamy taste, it’s important to note that all of Ansel’s soft serves are made from fresh ingredients and real milk, instead of a powdered mix.

Portions are substantial, as is the soft serve itself, meaning it would be hard to commit to that second cone, as a few people in line had initially set out to do. If you must make a Sophie's Choice, our heart lies with the burrata, which was also the more popular of the two, but the swirl would also be a tasty choice for the adventurous (or indecisive).

Even with the surplus of creative ice cream offerings this spring, this soft serve counter is bound to take off, so be prepared for some of Ansel’s signature lines. Cup or cone, each flavor is $7, including the swirl (we recommend the cone, which is homemade and tastes like honey and almonds). Stop by the counter Friday through Sunday from 12 p.m to 9 p.m. 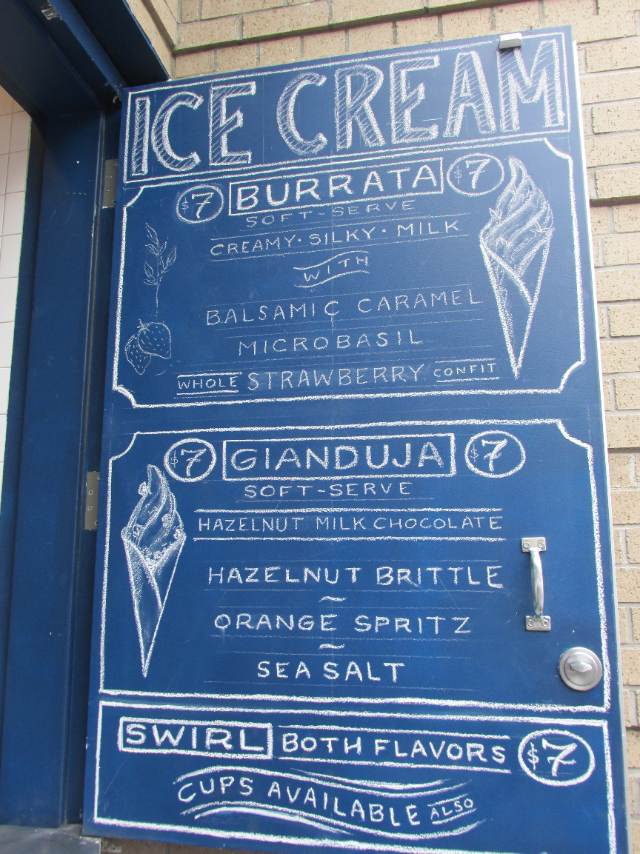