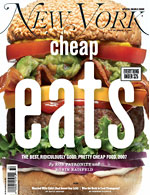 If you've lived in New York for any period of time, you know that the food here is incredible -- the variety, the quantity, and the quality. You'll also know that you don't have to pawn off your valuables to taste all that the city has to offer. This week's New York Magazine celebrates the city's cheap eats. Rob and Robin provide an extensive list of their picks, including some of our favorites: Bocca Lupo, Flatbush Farm, Go!Go! Curry, Momofuku Ssäm Bar, and Peri Ela (just tried it for the first time last weekend), among many others.

Find out the results of the "Great Cheapavore Challenge," where three local chefs made dinner for two for $25 or less from strictly local ingredients. Keep reading and you'll also discover where the chefs go when they want food that won't break the bank, what the newest barbecue joints and delis have in common, and where to find "cheap expensive food.

And in case you missed it, last week was Time Out New York's Cheap Eats issue, in which they introduced a new food pyramid, including the basics, international, gourmet, desserts, and at the top, free eats.

Were your favorite cheap eats left off the lists? Tell us about them!