Last year, a pop-up restaurant started by Restaurant Daniel alum Nico Russell and some of his colleagues enjoyed a sold-out run at two different Brooklyn locations. Oxalis began last summer at Fitzcarraldo, eventually moving west to Williamsburg's Egg Restaurant, serving multi-course, alcohol-paired dinners that were quite a bit different from the eggs and biscuits slung in the space during the day.

At the end of October, it seemed Oxalis would be put on temporary hiatus; luckily, the approachable but refined dinners have returned, with their next date set for February 28th.

"Originally we had considered taking a break from pop-ups but there has been so much demand that we feel that it's important keep the pop-ups going," explained Steve Wong, the team's spokesperson. "The pop-ups through last year have shown us that the tasting-menu part of our concept worked. By creating a set menu that's fairly vegetable focused and not too heavy, we've managed to really control our costs and tune our service model where everything feels both natural, comfortable, and well-paced (we hate long drawn out tasting menus!)."

Their approach to fine dining and tasting menus definitely differs from the traditional format. Anyone who's attempted a tasting menu in NYC knows to expect many courses over many hours, costing major damage to one's credit card. At Oxalis, attendees enjoy around 10 courses—each paired with a cocktail or specially-selected wine—for $85, though reservations are sold in pairs for $170, so solo dining's not really encouraged. 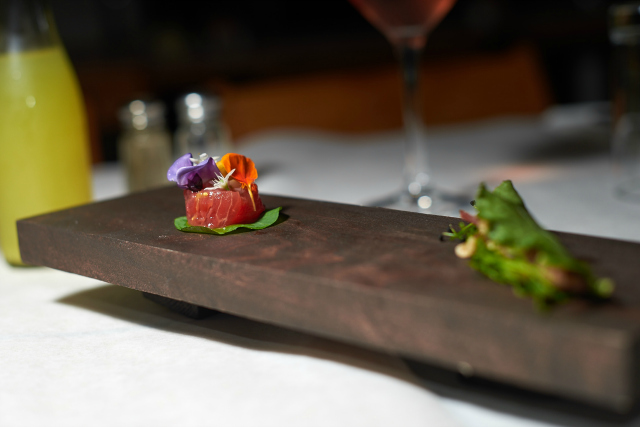 Russell's background—which also includes a stint at Mirazur, a two Michelin-starred restaurant in France—isn't as common in the pop-up world, which tends to focus on quick service-type operations centering on a particular dish, for example.

In general, tweezer food doesn't lend itself to the transient nature of the roving kitchen, though supper clubs—where patrons buy into private dining experiences through a membership—tend to be more fine dining-oriented. That's part of what makes the Oxalis experience unique: haute meals made more egalitarian through public access and an approachable setting like Egg's cozy back dining room.

Though it changes every time, meals might begin with a few amuse bouche, little dishes meant to be eaten in one pop. During the October iteration, this was accompanied by a bottled cocktail one team member warned was "pretty strong"; would that I'd listened to his warning, especially multiple glasses of wine later. From there, beautifully-plated and (blessedly) reasonably-sized dishes like trendy Sasso chicken with rainbow chard and Atlantic tilefish with potato and leek. Raw herbs and edible flavors are used to great effect.

Ultimately, Oxalis hopes for more than a nomadic existence. "Our goal is to open a brick and mortar as soon as possible," Wong tells us. "We now have proof that it’s profitable for investors, and more importantly, that New Yorkers are ready for the same casual but thoughtful neo-bistro dining that is really exploding across Paris/France (and Europe, really) right now."

#egg
#oxalis
#pop-up
#tasting menu
#williamsburg
#original
Do you know the scoop? Comment below or Send us a Tip