Since opening in 2009, The Brooklyn Star has been one of the most consistently enjoyable dining experiences in Williamsburg, offering Texas-sized portions of gourmet, stick-to-your-ribs fare executed by chef Joaquin Baca and his team. Baca got his start in NYC as co-chef and partner at David Chang's Momofuku empire, but struck out on his own to open his own place and cook Southern accented food in a constantly jammed space on Havemeyer. When that spot went up in flames—the space now houses Best Pizza—Baca moved the operation to a larger, sleeker version on Lorimer Street, still managing to pack in big crowds for brunch, dinner and beyond.

As the restaurant celebrates five years, we talked with Baca about his new summer residency at Jacob Riis Park and how late nights drinking and toking inspired an outside the box dish creation.

What makes your cooking at Brooklyn Star so special is that it's elevated and it's thoughtfully prepared, but at its roots it's comfort food that you crave all the time. Was that juxtaposition was intentional in designing the restaurant? Yeah, the goal was to make something accessible. It's a neighborhood restaurant, and it's sort of designed as a family place, even if it's not your legitimate family. We designed it to eat like you would in Chinatown; it's big and shared and convivial family-style, and everyone gets in the same bowl together and has a good time.

The goal is to have something that's very approachable and has mass appeal, like American comfort food that makes everybody feel warm on the inside, which is not necessarily just the heavy biscuits with gravy and mac n cheese kind of stuff. The thought is to just give people something that is familiar somewhere in the back of their head. Certainly that's the reason not to put a little bit more thought into it and to not reinvent the wheel, just to make it a really nice wheel.

You offer these huge portions for super reasonable prices, like Texas-sized portions. How the hell do you make any money? You try to balance your cost based on the main protein, and for the rest of the stuff you just try to work those ingredients better, by just using more affordable ingredients to balance out the cost of a plate. Certainly there are easier ways to make a living, and you could definitely charge more, I suppose, but we are still trying to buy the best product available—at least the best product we can afford. We are trying pass on the savings to our customers and still give them a family portion. Say five people came and sat down, I would prefer that they eat five to six small plates and then share two or three entrees, because they are big things that are meant to be divided up by a group. 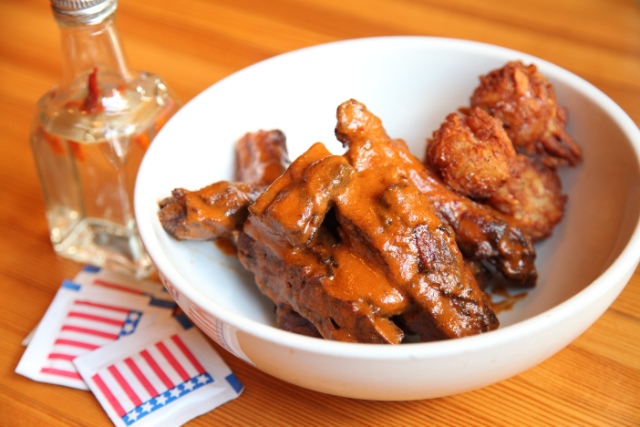 What's the dish you will never get sick of making? Well, I guess I'm probably not gonna get sick of anything at this point. So much of the life of cooking is the repetition, so if I get frustrated by that repetition, then I shouldn't have a very long career. Cooking things like pig tails, cooking offal in general, is something that's always very fun for me. Turning something that's otherwise discarded or not anyone's first thought, spending the time to make those things delicious and amazing and interesting to people is really fun for a cook. Those kinds of things are probably my jam.

Do you ever pine for/feel nostalgic for the original space on Havemeyer? Absolutely! There was something very personable about a space that size. In the same way that my whole time at Momofuku, the most fun that any of us ever had was when there was such a small audience. It was great taking so much care of each person, which is not to say we take less care on a plate, but the diner's a little further removed. Certainly the aspect of managing a place that size is a daunting task, and it's running smoothly now, but that has not always been the case. It's been tough to manage that many people in that much space, a lot of stuff can fall through the cracks, so it's very stressful to try to watch every aspect of it and try not to miss anybody's fuck-ups 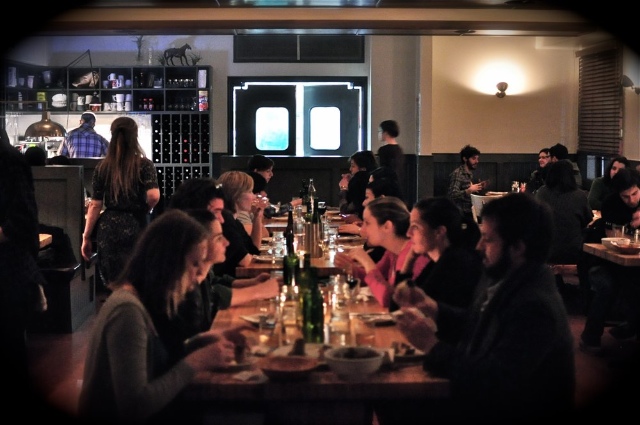 Your restaurant is so rooted in these Texan dishes and now that sort of ethos is so popular in New York City. How do you feel about that and what are your thoughts on the popularity of Texas right now. It's always been a boisterous state. All Texans are very proud, and all "Tex-pats" in New York seem to wind up kind of sticking together or at least finding each other. Most of the Tex-pats that open a business wind up adding a Texas flair to it. It's sort of a natural thing and I think that there are just a lot of Texans in New York, so it's not surprising that some of that philosophy would pop up. It's not surprising at all.

Does that make you feel like you were sort of an early adapter? Is it "the more the merrier?" Oh no, it's more the merrier. You can't really claim first dibs on being Texan. Yeah, bring 'em all, that's great. I appreciate the company.

Tell me more about the summer concession stand at Jacob Riis. How did that come about? We had a little bit of a relationship with the Brooklyn Night Bazaar people. They had a warehouse up on the Northside where they were hosting bands and vendors of random stuff and food vendors, so we did a few events there. Just this summer, actually, they signed a five-year lease to manage the concessions at Jacob Riis. Jacob Riis used to be a booming social scene, because there's a very solid infrastructure. There used to be Howard Johnson's, which is the kitchen we are all now occupying. What it winds up being is five vendors and kind of an open food court garage-door scenario. Each one has a hood vent and a proper kitchen, so we are able to offer food to the public. At least on busy days that place gets packed out. On Fourth of July it's balls to butts on that beach.

It's great. It's a fun park compared to the Rockaways because it's not really a city beach, it's federal parkland. There's a ton of sand before you get to the ocean, and there's a boardwalk, but beyond the boardwalk there's not a series of high rises and buildings, so it does give the feeling of being a little bit out of the city. It's kind of nice. Aside from that, the guys who are managing it also have a bar, so there's a full-service bar where you can walk up, get a drink, and carry the beverages down to the beach. It's a pretty good novelty, I guess, so I hope people are gonna take advantage of it. Hopefully it won't be too rowdy, but I think it should be pretty fun! 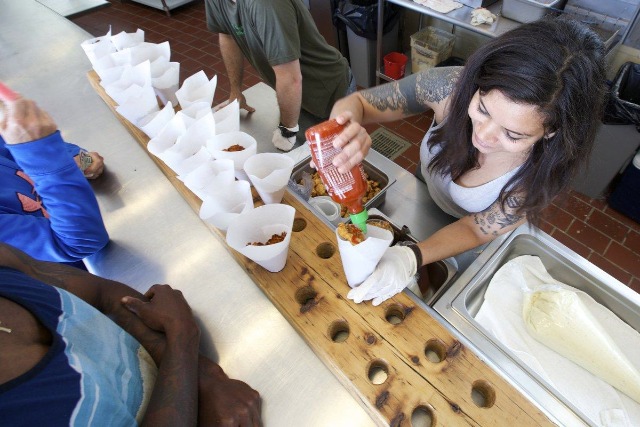 What's the deal with the fried chicken waffle cones? What fever dream produced those? That would be me and a bunch of cooks sitting at work by the cooler at the old Havemeyer space, drinking beer and smoking pot, and thinking that we needed something handheld for an event. We sort of transformed a couple of ideas into a late-night harebrained scheme.

It definitely sounds like a stoner's creation. Yep, that's kind of what happened. You feel good when you arrive at something like that. I'm sure i'm not the first person to ever have thought of that. It's kind of a perfect outside, handheld festival food. It's good for one hand and it has all your basic food groups. You get your slaw, you've got your mashed potatoes, you've got your fried chicken. I think there's some grains in there. There's something vaguely food pyramidish about it.

So now that you have the Jacob Riis thing and you have the restaurant, would you consider/ are you considering expanding to another restaurant, or do you feel satisfied with the business you've created for yourself? I feel satisfied with the business, but there's always something on the horizon. Something always pops up, some little idea or another late-night stoner discussion, or sitting with the sous-chefs after work at the bar. There's always some concept or some thing that needs to be done. As it so happens, there are a couple of those on the table right now. Some of them are more realist than others, but it's a little too early to talk about the specifics. But yeah, are definitely some plans on the horizon.

#brooklyn star
#interview
#jacob riis park
#joaquin baca
#original
Do you know the scoop? Comment below or Send us a Tip