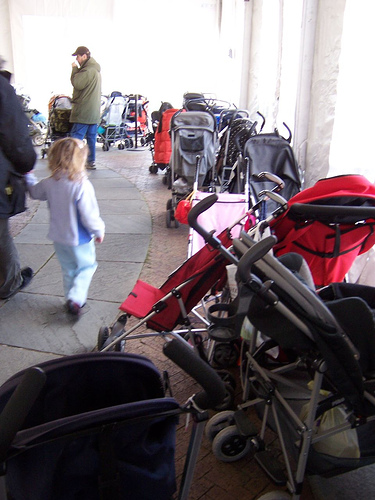 After Union Hall banned strollers (and the little ones who ride in them) -- a line was drawn in the sandbox, waging a full on war between the childless and the stroller pushers. But could there now be a light at the end of the tunnel? The Brooklyn Paper is reporting on a possible solution, at least at Water Street Restaurant in DUMBO.

The restaurant has joined forces with Parent Play, a company where you can make dinner and babysitter reservations all with one call. The first Brooklyn restaurant to team up with the company (three Manhattan restaurants already have), Water Street is now offering up on-site babysitters so parents can dine while their children are watched in a separate room. If you want to use the service, it'll add an extra $18 to $30 onto your bill (depending on how many kids).

The idea is almost as perfect as, say, getting a babysitter to come to your home while you go out -- albeit this is a simpler, cheaper solution. Will it make everyone happy? It will certainly be appealing to those who can't find a spontaneous sitter, and the childless customers will be able to eat in peace. As the eatery's owner says, “Anything’s better than having screaming children in a restaurant."

Will other Brooklyn restaurants clear out their wine cellars to make way for romper rooms?

#dumbo
#Parent Play
#stroller mafia
#strollers
#water street
Do you know the scoop? Comment below or Send us a Tip