For some folks it's stamps; for others, rare coins. But for Scott Wiener it's pizza boxes. The Brooklyn man just earned the Guinness World Record for "Largest Collection Of Pizza Boxes." Guinness confirmed Weiner's collection today, the ninth annual Guiness World Records Day, which sees thousands of folks just like Wiener looking to get their names in the annals of trivial history.

So what sealed Wiener's deal as the pizza box collector king? Some 595 different cardboard pizza boxes from 45 different countries, which he started collecting in 2008 after seeing a "particularly beautiful one in Israel." His first saved box? A "Tour of Italy" box from Roma Foods that depicted Florence, Italy. "It was so colorful, I couldn't pass it up!" he told Guinness.

And while pizza typically comes cheap, Wiener and his brother once paid $200 for a 54 inch square pizza just so they could save the box. "I tried to ship it but the $170 price rage [sic] was too crazy so I cut a few hinges and shrunk it down to a $65 shipping fee to get it across the country from LA," Wiener explained. "It's a prized possession."

It's no surprise that Wiener would be the guy behind this massive collection; he runs Scott's Pizza Tours, which takes pie-curious folks all around town to sample some of the best in the city. With all the touring around one would think Wiener regularly buys pies for their cardboard containers, but Wiener says he's "only paid for six pizza boxes out of my nearly 600 and all of them were impulse e-bay purchases totaling about $75." And now you know that you can buy pizza boxes on Ebay. Our weekend plans just got a LOT more interesting. 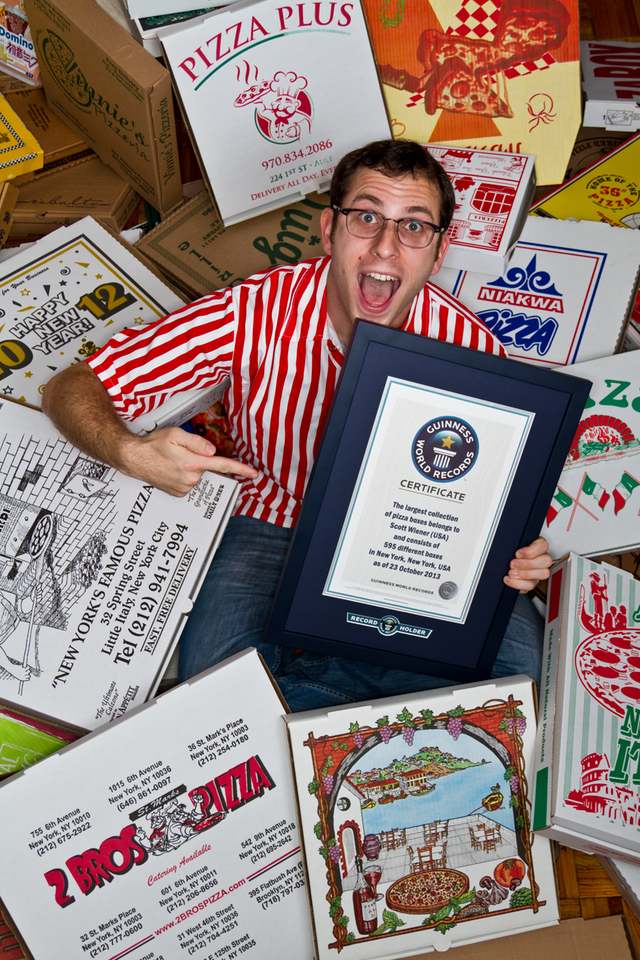 #guiness book of world records
#guinness world records day
#pizza boxes
#Scott Wiener
Do you know the scoop? Comment below or Send us a Tip