Unicorn Latte, $9, at The End. (Photo by Scott Heins/Gothamist)

Earlier this year a Brooklyn cafe called The End, sister shop to Montauk Juice Factory, introduced a frothy blue drink called the Unicorn Latte. It was the next logical step into the unfortunate Unicorn Food trend, which takes perfectly fine food and makes it less edible but more Instagrammable. At the time, they told us:

It is named the Unicorn Latte as the drink is meant for you to fly high and tap into your inner mystical, powerful self. The latte is made with E3 live, a potent blue green algae which decalcifies the pineal gland.This is a gland many ancient cultures believed was the seat of your intuition. The pineal gland is calcified by stress and modern toxins, including our water, and when it’s calcified, it makes it harder to access. Decalcifying the gland can lead to extreme mental clarity, and helps one restore health and vibrancy to the physical body.

It did not taste good. It tasted like warm juice. 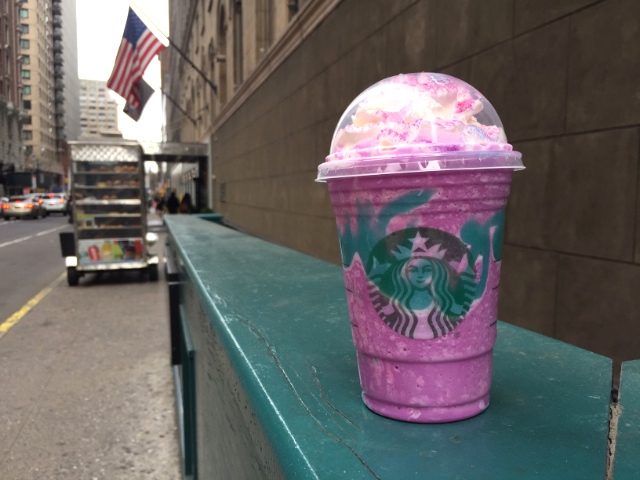 Later this year, Starbucks introduced a Unicorn Frappuccino. They explained:

The elusive unicorn from medieval legend has been making a comeback. Once only found in enchanted forests, unicorns have been popping up in social media with shimmering unicorn-themed food and drinks. Now Starbucks is taking the trend to a new level with its first Unicorn Frappuccino® blended beverage... made with a sweet dusting of pink powder, blended into a crème Frappuccino with mango syrup and layered with a pleasantly sour blue drizzle. It is finished with vanilla whipped cream and a sprinkle of sweet pink and sour blue powder topping.

Some say it tasted like "molten clown," others got sick to their stomach, and Stephen Colbert called it "a sugary affront to God."

And now, in a battle with a zero winner outcome, The End is suing Starbucks, claiming "the idea of a brightly colored, multi-flavored drink was theirs," according to TMZ. The lawsuit states that The End "filed paperwork to own the name in January," and they want Starbucks to pay up, and also "stop using Unicorn on its drinks." Same.

The suit also states: “The size of and scope of Starbucks’ product launch was designed so that the Unicorn Frappuccino would eclipse the Unicorn Latte in the market, thereby harming [The End] and confusing their customers."

Starbucks says the lawsuit has no merit. We've reached out to The End for comment and will update if we hear back. And the unicorn would still like a goddamn Scotch, please.

Make it stop. A cartoon by Pat Byrnes. #TNYcartoons

#lawsuit
#sad
#starbucks
#the end
#unicorn Frappuccino
#unicorn latte
#unicorn trend
Do you know the scoop? Comment below or Send us a Tip