The curtain is closing on Broadway hangout Cafe Edison sometime in the next month, Vanishing New York reported today. The 34-year-old restaurant has long been favored by actors, producers and stagehands looking for a cheap and good lunch in midtown.

The menu is simple fare with Eastern European influences like matzo ball soup and blintzes, which gave the cafe its nickname: the Polish Tea Room (a joking allusion to the upscale Russian Tea Room nearby).

Most striking about the cafe is the decor. It's a classic New York luncheonette and coffee bar with vinyl booths and bar stools, but housed in what used to be the grand dining room of the Hotel Edison. It has original chandeliers, arched ceilings, carved columns and moldings, all basking in a pastel pink and blue hue.

New York Magazine said in 1996 that "if the Walt Disney World people ever want to re-create Old Jewish New York, they would do well to simply buy Cafe Edison and movie it down to Orlando." 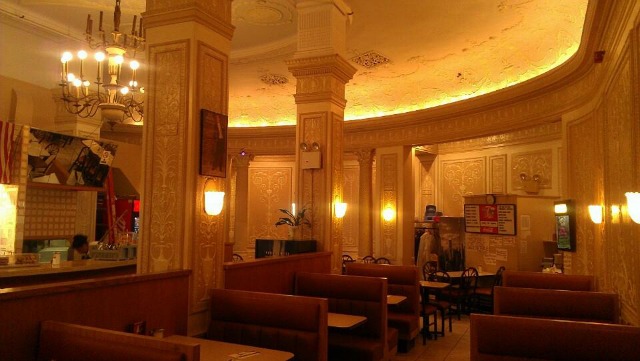 Patrons included Neil Simon, Jackie Mason, and Broadway producer Emanuel Azenberg, who produced Rent. Magicians used to have their own section next to Broadway stars, police officers and secretaries. Playwright August Wilson jotted ideas for three scripts on Cafe Edison napkins, while eating stuffed cabbage or corned beef. Simon based his play, 45 Seconds from Broadway on the Cafe Edison; it's a comedy about theater people who hang out in a cafe, with characters based on the owners.

The Cafe was opened in 1980 by Frances and the late Harry Edelstein, who was such a fixture in the community that when he passed away in 2009, Broadway's marquee lights were dimmed, an honor usually reserved for producers and actors. Now, their son-in-law Conrad Strohl runs the place and told Jerimiah Moss that the Hotel Edison, where Cafe Edison is located, won't be renewing the lease. The Hotel Edison has been making many changes as of late. In 2010, the Rum House bar was closed, and last year Sofia's Italian restaurant was forced out.

#broadway
#cafe edison
#RIP
#Times Square
Do you know the scoop? Comment below or Send us a Tip