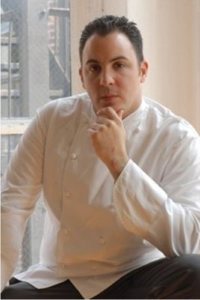 A bit of breaking food news: Doug Psaltis has left the Executive Chef position at Country restaurant after three years. Word has it that the 33 year-old chef has parted ways with chef/owner Geoffrey Zakarian to pursue other restaurant plans. While there’s no official word from the chef yet, chances are his next kitchen won’t be doing molecular gastronomy: Psaltis told Metromix in September that “I think we are getting too far away from our roots with food that is unidentifiable.” Expect no “soils,” “airs,” “fantasias,” or that kind of stuff from the chef wherever he turns up next.

Earlier this year, Psaltis won a StarChefs Rising Stars award for Best Hotel Chef. Country, which is inside The Carlton Hotel, received a 1 star Michelin rating for the last 2 years. The restaurant is 1 of 50 that carry a 3-star or higher New York Times review. A few fine dining restaurants on the list, however, such as Alain Ducasse’s outpost at the Essex House (and where Psaltis once worked), have since closed. Psaltis wrote about his mentor Ducasse in his 2005 book The Seasoning of a Chef, which was considered controversial by some.