Since reBar in DUMBO shut down, there hasn't been much action in the Front Street space, but now an excellent new sandwich shop called Bread & Spread is breathing new life into the tiny downstairs space. Although there's no signage to indicate it yet, push through the front doors of the now-defunct bar and you'll find a little sandwich wonderland waiting on the other side.

Neighborhood locals may know about the Paris Sandwich cart that dishes out Banh Mi creations on perfectly crusty bread during the warmer months. Inside that cart you'd probably spot John Coppola, who left the fine dining world of the Xavier Group to open a grilled cheese truck, the banh mi cart and finally Bread & Spread, the sandwich stall with equally challenging space restrictions as a food truck. 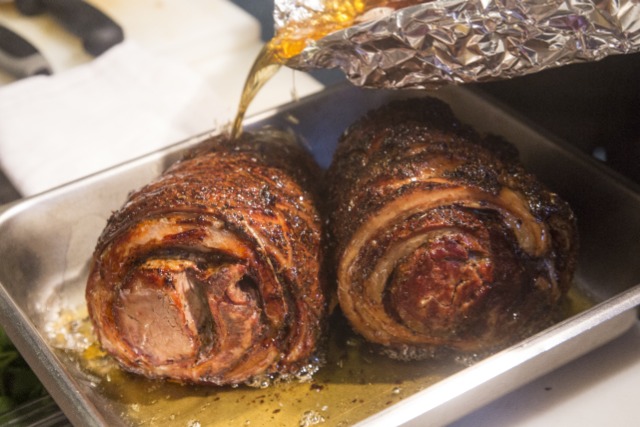 But despite the diminutive size of the kitchen, Coppola is turning out wonderfully flavorful sandwiches stuffed with scratch-made ingredients from spreads to proteins. Because there's barely area to prep, Coppola lets the skilled butchers at Dellapietras on Atlantic Avenue work their magic on the meat, which includes succulent porchetta seasoned with bay, garlic, fennel and black pepper; Bell & Evans chicken breasts marinated in a red wine vinegar, garlic and sriracha; and an Amish Turkey that "eats better than I do," Coppola quipped.

If you're at the shop at the beginning of the lunch rush, you'll witness the dramatic exit of the porchetta from the oven, which involves a dramatic whoosh of steam. It is then let to rest before being sliced up, and then joins a house-made vegetable spread, sharp provolone or Swiss cheese, pickled onions and arugula on a square ciabatta roll ($10.75). It's by far the most popular item that they make and with good reason: it's outrageously good and an excellent addition to the city's roasted pork sandwich options. 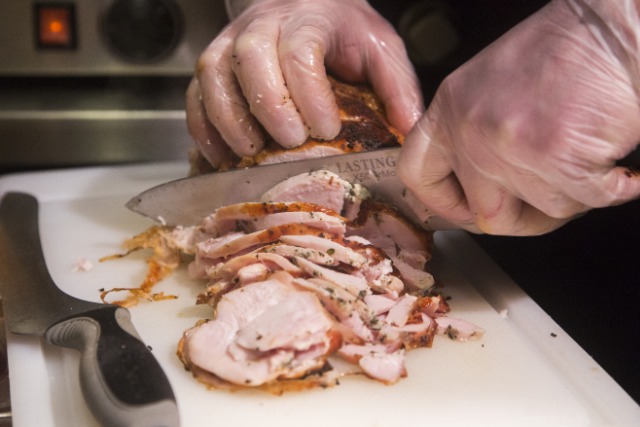 Same could be said for the roasted turkey sandwich ($10.75), served on Hudson 7-Grain bread that's been prepped with a cranberry mustard and Muenster cheese before it takes its turn for a toast in the oven. Once the cheese is bubbly, Coppola adds crispy shallots—the heat releases the oniony flavors—watercress and slices of herb-accented turkey. The other meat option includes chicken breast ($9.75) cooked in Coppola's beloved cast iron pan, then sandwiched between fresh mozzarella, tomato, basil and a balsamic reduction on a ciabatta roll.

While the meats are glorious to behold (and eat), there's also an option for vegetarians with their Garden sandwich ($8.75). Carrots, zucchini and yellow squash are shaved into ribbons then tossed with a red wine vinegar, and placed in the oven to caramelize before being topped with tomato, avocado and watercress, which Coppola has decreed to be "the new kale."

As with all good things, be prepared to wait, as all the sandwiches are made-to-order and all of them take a turn in the oven at some point during prep. That also includes the morning egg sandwiches ($3.50), which can be amped up with avocado, bacon, turkey bacon or Kurobuta ham ($1.50); cheese ($.75); or served on a Ceci Cela croissant. "I love sandwiches," Coppola says. "They make me happy."

#bread & spread
#dumbo
#new restaurant and bar radar
#rebar
#sandwiches
#original
Do you know the scoop? Comment below or Send us a Tip