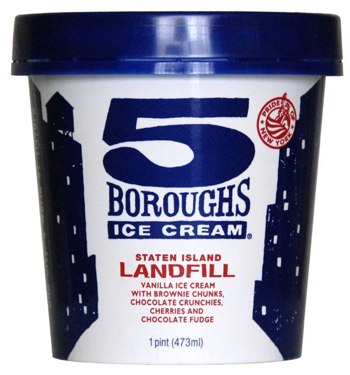 Staten Island is not having a good week. In addition to the outrage over the weird ad copy appearing in part of a Virgin Mobile campaign, the borough’s president has also called for an ice cream boycott. Last Friday, a perturbed James P. Molinaro wrote a letter to Scott and Kim Myles, husband and wife co-owners of the Queens-based 5 Boroughs Ice Cream company. Someone had shown Molinaro a copy of a flyer printed off the 5B website, meant to help persuade local specialty food storeowners to carry the ice cream. There are currently eight 5B flavors, all made in small batches; each is named after a NYC locale or neighborhood. For Molinaro and many Staten Islanders, the offending ice cream flavor is Staten Island Landfill- a swirly mix of brownies, fudge, crunchies, and cherries in a vanilla base. Molinaro objects to what he considers old hat outer borough typecasting; the Staten Island Advance quotes his letter to the company as saying "I am hard-pressed to think of a more insulting and derogatory attack in the name of consumerism.”

For their part, 5B co-founder Kim Myles told the Advance: “We’re an ice cream company that has fun. We knew the flavor would be controversial.” The "theme" of Staten Island Landfill isn’t much of a departure from the other 5B flavors, which include Amoretto Amoré for Bay Ridge. That flavor tastes like its namesake liquor, and is mixed with sliced almonds. It’s meant as an ode to the Brooklyn neighborhood’s Italian residents, and somewhat playfully at that. Bay Ridge is home to many ethnicities and nationalities, and it’s hardly all Italian. Similarly, the Fresh Kills Landfill in Staten Island closed for good in 2001. While still there, it’s hardly the whole borough. But residents no longer want to be associated with a site that was predominantly a garbage dump.

The controversy has temporarily overshadowed the 5B mission statement, which Scott Myles detailed in a Gothamist interview last month. The company was founded with the intention of sourcing and using local products; the baklava in the Bakla-Wha?! flavor, for example, comes from Astoria’s Victory Sweet Shop. Moreover, the company regularly gives profit percentages of particular flavors to charities, and donates even more product for charity events. In a follow-up statement for Gothamist, Scott and Kim explained their position a bit more:

It is never the intention of 5 Boroughs Ice Cream to cause serious offense or harm. We try to have fun with all of flavor names, and respect the fact that some folks may not share our sense of humor. New Yorkers are never shy about their opinions, and that's one of the reasons why we love our town, and want to explore it via tasty ice cream. As a NY-centric company, we strive to make a difference, not just a profit. We use local mom & pop vendors for our ingredients whenever possible, donate to local charities, and give 5% of the proceeds from our 'NYPB' flavor to the NYPD/FDNY Widows and Children's Benefit Fund. We love NYC, and hope to continue to create fantastic ice cream flavors that celebrate (and poke a bit of fun at!) all of the 5 boroughs.

As a diplomatic solution, borough president Molinaro proposed a new Staten Island signature flavor: Ferry Berry. Thinking similarly, Scott Myles says Staten Island Cherry has been in the works since the company was founded, and expects to roll out the first pints of the flavor in 2008. In the meantime, 5B will keep producing Staten Island Landfill, its top seller. 5 Boroughs Ice Cream is now carried by the home delivery upstart Bread-n-Brie, and pints are beginning to make their way into Whole Foods stores in Manhattan.