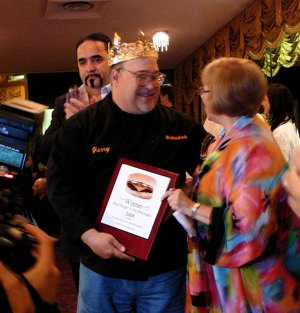 There was a smorgasbord of inter-borough hamburger love last night at the chandelier-bedazzled Astoria World Manor in Queens for the inaugural Burger Battle of the Boroughs. Representing good taste in general at event sponsor Pat LaFrieda Meats's table, Seymour Burton chef de cuisine (and non-competitor) Josh Shuffman cooked the restaurant’s signature burger for spectators while the event was judged.

At the judges’ table, author Arthur Schwartz seemed to have a beef (sorry) with Grub Street editor Josh Ozersky’s unabashed support of White Castle burgers. Kelly Choi smiled and asked for a glass of red wine. Hamburger geeks bumbled around the room, debating the proper ratio of fat to protein. Arepas and sushi from restaurants all over Queens were also in abundance, because last night’s cookoff was merged with the longstanding Cusine of Queens event. It was not the all-encompassing burgerpalooza one might think — DuMont, Piper’s Kilt, and Donovan’s burgers didn’t make it to Astoria. Insert name of your favorite far-flung burger here, and mutter next year just under your breath. Kick your file cabinet if you have to, and hope none of next year’s burgers test positive for steroids.

Decked out specimens from Joe’s BestBurger, Brgr, The Farm on Adderley, Resto, Harry’s Water Taxi Beach, Coals, and 67 Burger were hand delivered to the seated panel of experts, who then evaluated their various strengths blindly, and checked off boxes on tally sheets. It should be pointed out that each competing burger has a distinctly telltale taxonomy: The Farm uses an English Muffin instead of a bun, Coals’s bun sports grill marks, and Joe’s burger has a double patty, for instance, so it might not have been that hard to figure out what restaurant cooked which burger. Regardless, it was Harry Hawk of Harry’s Water Taxi Beach (and the late Schnäck) that ultimately prevailed and took the title. There was no gushing gratitude speech from Hawk (pictured), but there should have been, because nobody ever gives pickles enough credit.