Summer may be all but over, but Smorgasburg, the outdoor food market on the East River in Williamsburg on Saturdays, is still going strong. Launched this summer, Smorgasburg boasts some of the tastiest food purveoyrs in town, including The Meat Hook, McClure's Pickles, Saltie, and Danny Macaroons, as well as an abundant Greenmarket.

One of the first vendors you'll encounter upon entering Smorgasburg from the south is Bon Chovie, and you'd be making a big mistake not to rock out with a serving of their scrumptious fried anchovies. These addictive little guys are offered two ways: decapitated or Jersey-style—with the heads still attached. Smorgasburg will roll on into November, and so there's still time to experience Bon Chovie. The husband and wife team behind the company, Neill and Renae Holland, recently answered our questions via email.

Why anchovies? These little guys have been overlooked and misunderstood for way too long! They are like that kid in the black trench-coat in class who never talks, but you know he must have something crazy to say. We wanted to give them a sexy little makeover and re-introduce them to everyone so they could get over the stigma, and see just how amazing they really are. Not to mention they are a wild, sustainable fish packed with vitamins, minerals and healthy fats... bonus!

How do you prepare your anchovies? Our chovies are breaded and fried to order. We get them fresh, drop them in a little egg-wash and give 'em a roll in some good old fashioned seasoned breadcrumbs. Then they go for a swim in piping-hot soybean oil for about thirty seconds, then they're dusted with sea salt and paired with our homemade pickled sweet peppers. We serve a little smoked paprika and lemon aioli for dipping. 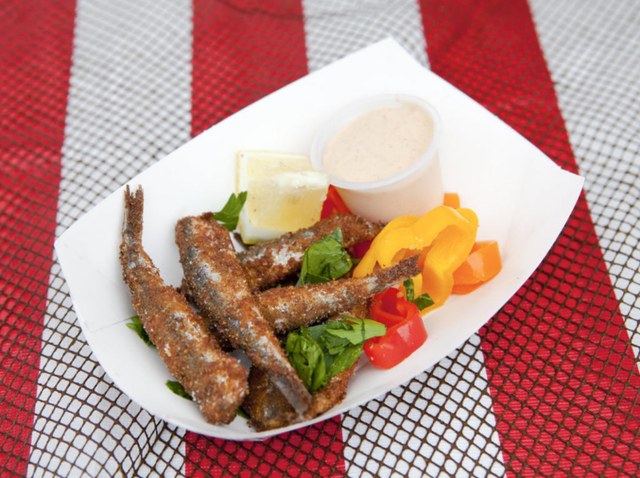 Where did these terms "original" and "Jersey-style" originate? We should start by saying we love Jersey and spend plenty of time there. In fact, Neill (he's taken to calling himself, "Pops Chovie") surf fishes from The Hook down to Cape May. - Now, truth is, our first batch of fried 'chovies were headless. We figured our customer probably wasn't going to eat the whole fish unless she was on an Anthony Bourdain kick. - On this point we were wrong, because, once our fish hit the table, the most common question was, "Can I eat the whole fish?" - Well, yes, you can...And that was the beginning of the Jersey Style. The customers really turned it into a fan favorite. - So to answer the question, the Original, is, in fact, the original offering, while Jersey Style - they go straight into the fryer - they're just the epitome of "Quick and Dirty, Jersey"...

How do you persuade someone who is squeamish about anchovies to get over it? We have converted many nonbelievers. We encourage them to start with the original—it's just like a french fry with a tail! Once they get those cute little fishies in their hands, dip it in the aioli and crunch... they are usually hooked.

Do you eat the vertebrae or just suck the anchovy flesh off it? The bones get really soft and crunchy when they are fried—you can eat the whole thing. Plus, that is where you get all of the calcium.

Do you prefer your anchovies headless or with heads, and why? I like the Jersey Style, whole fish: it's like delicious, crunchy, salty fish popcorn. Yum! Neill prefers The Original, I think after years as a fly fisherman and charter boat captain he likes the idea of someone else cleaning the fish for him.

Where do you source your anchovies? They are caught off the coast of Turkey and immediately flown into the states. We were surprised to find that local anchovies are not commercially caught or sold. We are hoping to change that.

How do you plan on expanding the Bon Chovie empire? What will you do in the off season? First of all, we will be rolling out some awesome new menu items this fall and creating great take-home products like cured anchovies and chovie condiments. Next summer we hope to have a bigger presence around the city and rabid Bon Chovie fans everywhere! In the off season we will be pumping iron and working on our matching anchovy tattoos.

What is the most unusual or exotic way you've prepared/consumed anchovies? Neill lost a bet one day and had to eat a whole raw anchovy right out of the box. He kinda just let it slide down like an oyster. I would say that was the most unusual. We have also fried up the heads only for a friend by request, we call them "head poppers".

What are your favorite vendors at Smorgasburg? It is really hard to narrow it down, because everyone there is so incredible. I would say that our top three are The Meat Hook, Rob & Anna's soft serve frozen bananas, Bite Size Kitchen, and Salud's fantastic smoothies. Oh wait, that was four, oops.

Do you know if Jon Bon Jovi, the recording artist, is aware of your company? If not, how do you think he'll react? I think if he met us, he would shake our hands and write a song about how amazing our anchovies are that would go straight to the top of the Billboard Hot 100. And maybe ask us to go on tour with him. Yeah, pretty sure that's what would happen.