Bar Uni in Greenpoint wants to get more sea urchin in your body with the launch of a new brunch program on Saturdays and Sundays. The restaurant will offer two "sets," one consisting of blue crabs eggs benedict with yuzu hollandaise, miso-maple bacon, and a mizuna greens salad and the other a bento with sake-cured, seared salmon, a sous-vide onsen egg in soy-dashi topped with uni, house pickles and miso soup. Both sets are $15 and will net you a free brunch cocktail during the launch. Some of the dinner menu items will be available, too.

Tom Colicchio's Rivermark, which operates a Little River Beer Garden, celebrates the last day of operation for the beer garden on Friday with an Oktoberfest celebration. Stop by the Kips Bay restaurant, which boasts terrific views out onto the East River, for pints of Oktoberfest Pilsner by Long Island City Beer Project and German-inspired food created by chef Andrew Smith. No reservations are required, so stop by whenever you want during the evening. 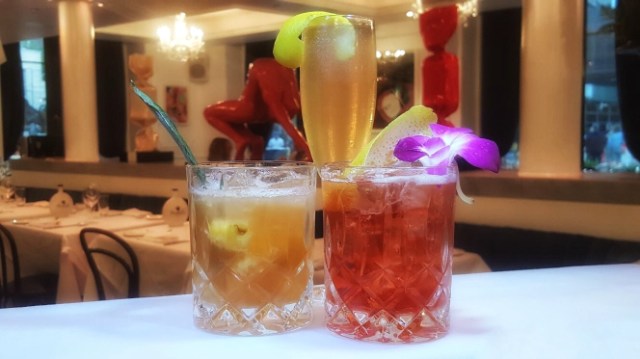 An event at Bagatelle in the Meatpacking District on Friday from 6 p.m. to 9 p.m. offers an another opportunity to help send aid to Puerto Rico. Purchase one of three new Bacardi-based cocktails—La Isla, El Coqui or El Boricua—and all $17 of the cocktail will be donated to GlobalGiving's Hurricane Maria relief efforts. Whatever cocktail is deemed most popular of the evening will remain on the restaurant's menu through the end of the year, with 100% of the profits continuing to be donated to GlobalGiving.

On Saturday, the Queens Night Market, which just came back for its fall season, also offers two ways to help out hurricane victims in Puerto Rico and earthquake victims in Mexico. First, they'll be collecting suggested $5 donations at the door; then at 7 p.m. they'll be selling portions of two whole roasted pigs from Angel Jimenez of Lechonera La Pirañas. Proceeds from both efforts will go towards the Hispanic Federation's "Unidos": A Hurricane Relief Fund for Hurricane Maria Victims in Puerto Rico.