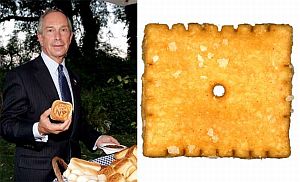 Mayor Bloomberg, our city's tireless crusader against vice, whose victory against the artery-clogging forces of trans fat has drawn outrage from bakers and restaurateurs, was recently caught trans-handed in this Wired magazine photo. Or was he? amNY is absolutely one hundred percent certain that’s a Cheez-It in Hizzoner’s right hand (in the Wired photo, not the image here.)

If so, it would signify a stunning display of hypocrisy, because each serving of Cheez-Its contains a half-gram of the deadly trans fat, a substance which the DOH blames for the city’s yearly 500-plus deaths from heart disease. As amNY points out, it’s not just his political image Bloomberg has to worry about – the guy had a pair of stents inserted in his coronary artery to remove a blockage in 2000.

But can anyone be certain what’s in that photo? There is a small bag of snacks on his desk, but are we sure they’re Cheez-Its? And what exactly is that in his hand – a Cheez-It or a little bag of drugs? When stared at long enough, the evidence seems to take on the Rorschach qualities of the Zapruder film. Is this 2008’s grassy knoll? And trans fat would seem to be the least of Bloomberg’s worries, because the Zodiac killer can clearly be seen advancing toward the Mayor from the back of the office! (Seriously.)

#As
#bloomberg
#Cheez-It
#doh
#mayor
#mayor bloomberg
#the city
#the office
#trans fat
#vice
#wired
Do you know the scoop? Comment below or Send us a Tip