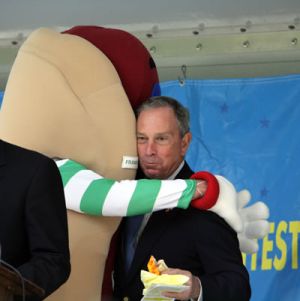 Mayor Bloomberg and City Council Speaker Christine C. Quinn have announced a plan to issue 1,500 new permits to vendors who commit to selling fresh fruits and vegetables from carts in low-income neighborhoods. The “Green Cart” plan, expected to be approved by the City Council, comes on the heels of a Health Department study comparing Harlem to the Upper East Side; it determined that supermarkets in Harlem are 30% less common than the UES, and that only 3% of Harlem bodegas carry leafy green vegetables, compared to 20% on the UES. The UES also has better sushi, but that disparity remains unacknowledged in Bloomberg's plan.

Speaking at a press conference announcing the plan, Health Commissioner Dr. Thomas R. Frieden pointed out that “we are in the midst of an obesity epidemic. In some neighborhoods, rates of obesity and diabetes are 50 percent higher than the citywide average.” But the Neighborhood Retail Alliance opposes the plan, fearing a loss of business to the carts. Richard Lipsky, a lobbyist for the bodegas, told the Daily News the “real problem is the lack of demand. If the demand was high, the stores would be well-stocked.”

Aine Duggan, vice president at the Food Bank for New York City, told the A.P. that vegetable sellers are especially needed in black neighborhoods in Brooklyn and the Bronx, where supermarket chains are often reluctant to invest.

There is a food desert in many areas. In order to make an extra trip to a grocery store, not in the neighborhood, you're talking about getting on a subway and dragging bags of groceries home.

To that end, Bloomberg also announced a partnership with The Food Trust, a Philadelphia-based task force that has successfully brought about the renovation of more than 30 supermarkets in Pennsylvania. They’ll be cooperating with the Food Bank to try and get more supermarket operators to open stores in low-income neighborhoods and push the produce.

Photo of Bloomberg with clingy hotdog via Epicurious.