Beginning today, Mile End Deli invites everyone to Blame Canada with a week-long celebration roast of our northern neighbors. Swing by either the Manhattan or Brooklyn locations for Canadian dishes like Pogos (their version of corn dog), foie gras poutine, butterscotch pudding and "Bieber Tales," fried dough covered in chocolate. The special menu features a disturbing artistic interpretation of Canada's most petulant pop star, which is reason enough to blame the entire country.

Wash any memory of Bieber from your brain with a bottomless brunch that's now on offer at The Wayfarer. A $38 tab buys you unlimited mimosas and bloody marys, including the restaurant's Bloody Mary Bar with different types of juices and garnishes. Also included: an entree from the brunch menu like Short Rib Hash and Poached Eggs or Huevos Rancheros. 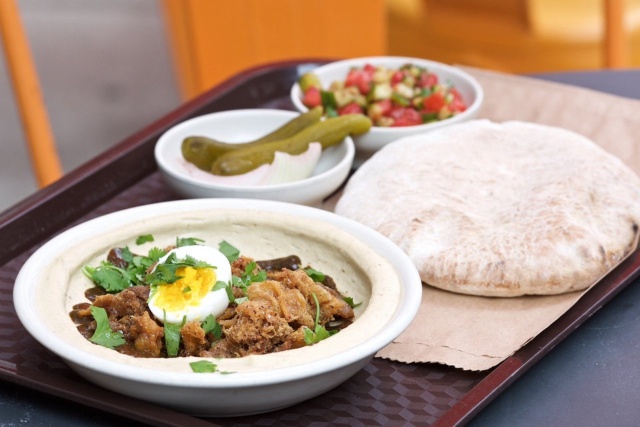 On Sunday from 11 a.m. to 6 p.m., head to 6th Avenue and 49th Street for the third annual Workmen's Circle Taste of Jewish Culture Street Fair for a boat load of the city's best Jewish and Jewish-inspired food vendors all in one place. Breads Bakery is bringing babka and other baked goods; Fletcher's Brooklyn BBQ is making a tri-tip pastrami; new hummus pushers Dizengoff are making a fried eggplant pita sandwich; and Seed + Mill, Kossar's Bagels & Bialys, La Newyorkina, Judy's Knishes and OddFellows Ice Cream Co. will be doing their thing as well.

Also on Sunday, Tiny's and the Bar Upstairs kicks off the first in their themed Sunday supper series with a dinner for the New Englander in your life. Feast on a lobster roll with Old Bay fries and a grilled gem caesar salad, followed by a chocolate espresso cookie with Cape May Sea Salt. July 3rd and 4th have suppers, too, starting with a Half Griggstown BBQ Chicken with accompaniments and Burger, BBQ Chicken and Tiny’s Pigs in a Blanket, respectively. Suppers are $35 per person.