Black Seed Debuts Its Upstart Bagels On The LES

This town fights for its bagels almost as fiercely as its pizza, so to open a new bagelry with even whiff of otherness takes some big doughy bagel balls. Noah Bernamoff of Mile End briefly put his out there in Red Hook late summer of 2012, only to have his efforts washed away by Hurricane Sandy's wrath. Now he's back with a new location, a new business partner and a kick-ass hybrid bagel he's ready to shove into our dough-obsessed mouths.

Give a warm welcome to Black Seed, the newest kid on the playground called the Lower East Side and a joint effort between Bernamoff and Matt Kliegman of The Smile. The duo kicked off their new bagel venture on Elizabeth Street this morning, drawing in parts of Bernamoff's Montreal upbringing and Kliegman's New York, boiling and baking up some truly delicious bagels with enough of the familiar and the profane to keep things interesting. The shop was kind enough to deliver us a late-day taste this afternoon; the bagels were still warm. 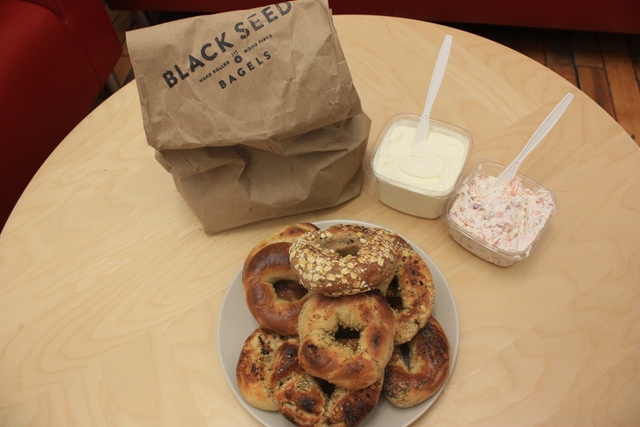 Black Seed's bagels are smaller than most of those currently on offer in the city, boasting a bigger hole and more crust-to-innards than their puffier NYC counterparts. There's no scooping necessary, though any real bagel eater wouldn't dare either way. The gluten-heavy dough is fermented, then rolled by hand, boiled in honey and then baked by a wood burning oven. The hand-rolled aspect can be determined immediately (no perfect circles here); the bagels also have a pillowy interior and a beautifully browned exterior with a nice chew that won't give you TMJ.

Their spreads are unique too, especially the homemade cream cheese, which boasts a tart flavor akin to sour cream and a lighter, airier texture that channels more of a Mexican crema than the gummy spread that's far too common at lesser bagel shops. The lox & dill spread is excellent too, with large chunks of smoked salmon and a whole lotta dill. 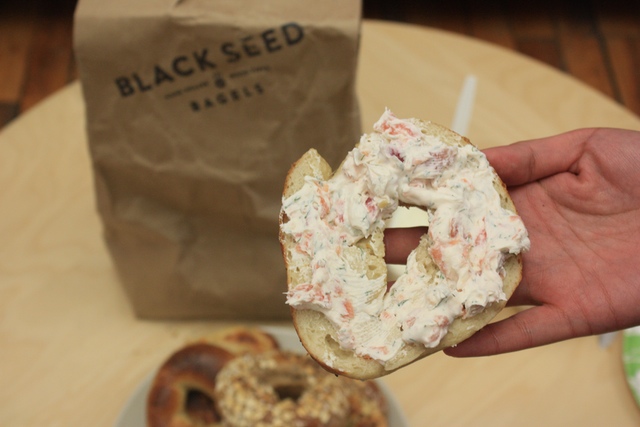 So will Black Seed be able to give nearby Russ & Daughters and their forthcoming cafe a run for their money? It may be hard to convince older generations to test out this new upstart, but the younger folks swarming the area should be amenable, plus we'd say there's room for both even in close proximity. Black Seed will also operate a kiosk in the forthcoming Hudson Eats in the Financial District, a neighborhood that could use a quality schmear.

#bagels
#black seed
#montreal bagels
#new restaurant and bar radar
#original
Do you know the scoop? Comment below or Send us a Tip