Our latest installment of Quick Bites brings us to Bing on Orchard Street.

THE VIBE
I've never been, but apparently in cities all over China the jianbing street-cart breakfast is as much a workday staple as the bodega BEC is here in New York. Which, as soon as you've eaten a few, makes sense: the bing (part crepe and part sandwich) is portable, it involves eggs (and meat, sometimes), it takes just a few seconds to make, and there's enough going on with its textures and flavors to make a sleepy/hungover morning feel a little bit better.

Recently here in NYC jianbing vendors have been popping up all over town, in both literal pop-ups and at places like Smorgasburg. And now there's a new counter-service restaurant on Orchard Street dedicated almost entirely to the dish, Bing Kitchen. Though it's not open for breakfast.

Run by Aaron Gallentine and Clio Goodman (previously of Puddin' by Clio on St. Marks), who fell in love with the ingenious snacks while on a food tour of China, Bing Kitchen is a sliver of a spot with room for four stools at a narrow counter in the front and a crammed-in kitchen area in the back. There's also a bench right outside to help accommodate "to-stay" orders.

It's a bit of a jumble to be sure, but the place feels less claustrophobic than maybe it should because of the inordinately high ceilings, a quirky layout that also gives Goodman a loft over her bing-maker for storage and an office. Ironic propaganda posters of Revolution Army Pandas and Chairman Meows complete the decor.

THE BITES
Given the space constraints, the Bing Kitchen menu is unsurprisingly to the point, with four varieties of jianbings and a couple of snacks. You can get your bings cooked soft or crispy, and though the former looks better on your Instagram, the latter is much more functional.

Probably the best bing I had was the monthly special, This Little Piggie, a lively, hearty layering of decent pulled pork, creamy slaw, and Sriracha chips bringing the fire and crunch. The most basic bing, called the Beijing Burrito, is made with lettuce, "crispy cracker" and spoonfuls of an excellent sweet-and-spicy house made sauce. It's pretty good, but definitely needs more substance, which—-Bing Hack Alert!—was handily available via my side dish of Beijing Alley Fried Chicken, a thinly-sliced boneless breast with a hint of cinnamon that tasted great shoved inside the "burrito."

The Imperial bing was less successful, mostly because the duck, the dish's primary ingredient, was so lackluster. Goodman sources the fully-cooked bird from a local takeout shop, so improvement here seems pretty easy. Among the sides and snacks, the Sweet Mungbean Soup, served chilled in the summer, was sugary enough to function as dessert (not necessarily a bad thing, just be warned); and the Tiger Salad of cucumber, scallions, and peppers was too stringy to warrant ordering again, though the dressing was pleasantly sour. And if you like roasted sweet peanuts and strong black vinegar, the Old Beijing Vinegar Peanuts is your move here. 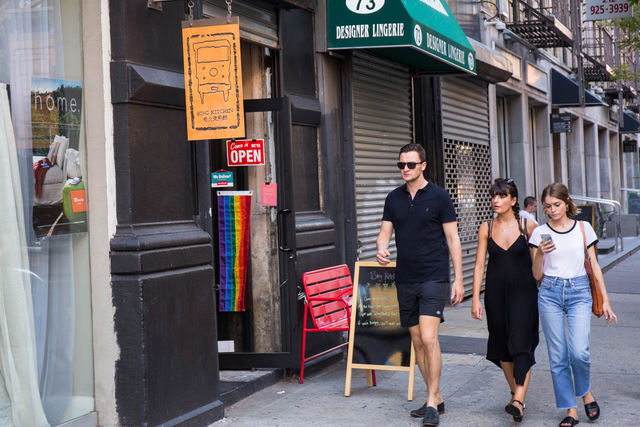 THE VERDICT
Bing Kitchen serves a decent version of the street snack which, despite some recent hype, is still not easy to find in most parts of the city. There's a lot of quick-bite competition in this immediate area, so let's see if Goodman and company can get people to add bings to their lunchtime and drunktime rotation.