Mayor Michael Bloomberg's vendetta against obesity and oversized soft drinks has ratcheted up this week, with his proposed soda ban—which would prohibit city restaurants, street vendors and movie theaters from serving sodas and other sugared drinks that are over 16 ounces—igniting critics and supporters all over the nation. But Soda's not one to go down without a fight,p articularly in light of recent declines in soft drink sales,and now companies like PepsiCo and Coca Cola are pulling out their big, fizzy guns to bring the ban down.

In response to Bloomberg's proposal this week, lobbyists and researchers for the beverage industry have been looking for ways to combat the mayor's assertion that large sodas contribute to rising obesity. On Friday, groups like the American Beverage Association took out color ads in city newspapers decrying the ban, and companies like Coca Cola and McDonalds attacked Bloomberg's anti-soda initiative on Twitter. And it's not just the Beverage Barons themselves who are out to bring the ban down: today, the Center for Consumer Freedom—which lobbies on the behalf of embattled industries like fast food, meat, alcohol and tobacco—took out a full page ad in the Times featuring Hizzonner dolled up in full Mrs. Doubtfire garb presiding over his "Nanny" state. 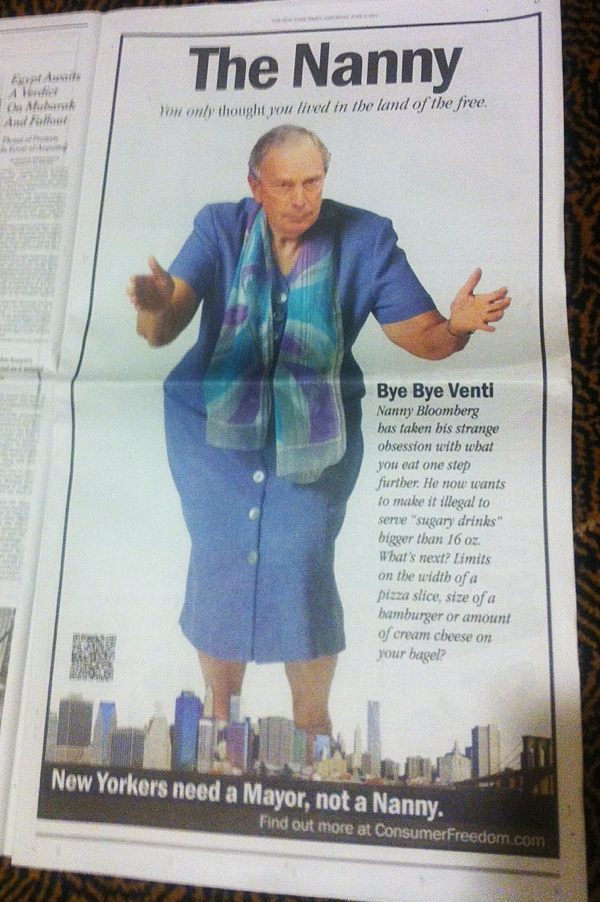 And thus, the fight between consumer freedom and calorie curbing wears on. Who will win? Only time—and a vote by the New York City Board of Health after a three-month deliberation period—will tell.

#board of health
#center for consumer freedom
#coca-cola
#mayor bloomberg
#mcdonald's
#pepsi co
#soda ban
Do you know the scoop? Comment below or Send us a Tip