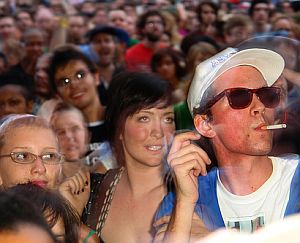 Quick, what New York City neighborhood has the greatest percentage of obese residents? Wrong! It’s Williamsburg, which is confusing, because everyone knows the only people who live there are the proverbial skinny hipsters.

But according to a recent study by the Citizens' Committee on Children, there are, apparently, still some non-hipster residents existing in Williamsburg! And they have children, and 30% of those children’s parents are “unhealthily overweight.” Or could there be a growing number of reclusive, heavyset hipster parents who've traded in their skinny jeans for billowing zubaz? If so, we're glad to say we haven't seen them. (Actually, please send pics.)

The same goes for Bushwick; both neighborhoods have some of the highest rates of adult diabetes in the city. And a quarter of the grownups in that area go entire days without eating any fruits or vegetables – but one suspects that number is a lot higher, because so many people who responded to the survey probably think vodka and cranberry counts as a serving of fruit.

#brooklyn
#bushwick
#highest
#obese
#overweight
#percentage
#williamsburg
Do you know the scoop? Comment below or Send us a Tip
A new Gothamist is coming! We’ve moved comments over to our beta site. Click here to join the conversation and get a preview of our new website.