Big New Williamsburg Starbucks A Perfect Place To Fuel Up Before Shopping At J. Crew

Dear Williamsburg 2014: Starbucks gets you. The mega-chain purveyor of pumpkin spice and misspelled names opened its second Williamsburg storefront Monday night—a brightly-lit exposed brick space at 154 North 7th street—determined to fit in with the formerly bohemian neighborhood's culture and cliches. Best of all, it's just a short walk from the J. Crew!

Starbucks' efforts to blend in with whatever Williamsburg is now can be seen in both dark wood fixtures and art from Susan Weinthaler, high-priced cups of the brand's Reserve coffee offerings, and an "engagement center" that will host regular tastings of beans sourced from all corners of the Starbucks-growing globe. Last night a mixtape of indie-folk Beatles covers played at medium volume over the shop's stereo; every barista on staff wore a beanie.

Starbucks has long been at the vanguard of a soulless vanilla monoculture sweeping the city (and America), but the new Williamsburg outpost's manager, Brandon Giles, stressed a commitment to the nearby neighborhood. "Local influence is a big part of what we're doing now with our stores," Giles said, flanked by shelves of Rose Red & Lavender plants and a wall of shining French press machines. 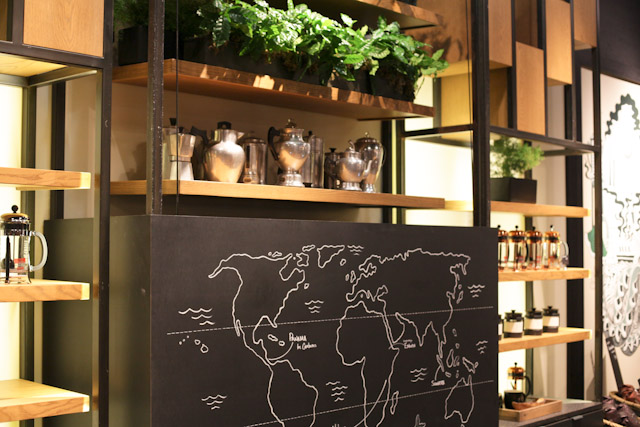 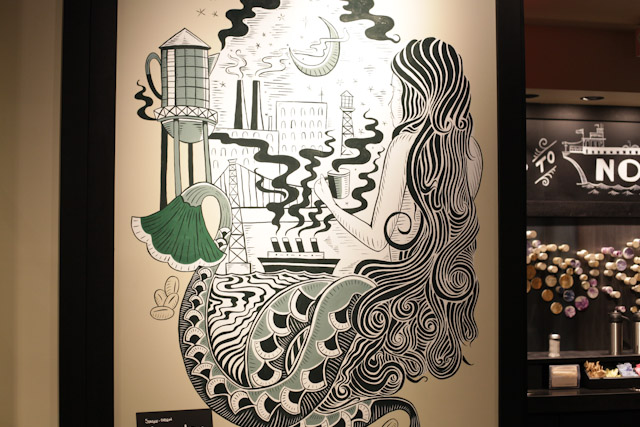 The space Giles manages is massive. Williamsburg Starbucks 2.0 covers 2,900 square feet, has seating for over 50, and has high ceilings give it an open, slightly-empty feeling. No other Williamsburg coffee shop feels quite so roomy. Daniel Lamblin, 37, of Williamsburg was at the Starbucks with his family last night and said that while he frequently gets coffee at Blue Bottle and Toby's Estate, those local, less-corporate shops have become too crowded. "They're basically full and the [neighborhood] demand is high, so I don't see this Starbucks as a big problem."

Another customer, Kevin Graves, 39, echoed Lamblin. “I’ve lived in the neighborhood for 9 years and I’ve seen it change a lot. But all of my local shops that I go to, now there’re so many tourists there. And so it’s so crowded and I can’t sit and work." Graves paused, then added "Hopefully this will draw the tourists, and I'll be able to go back to my local coffee shop." 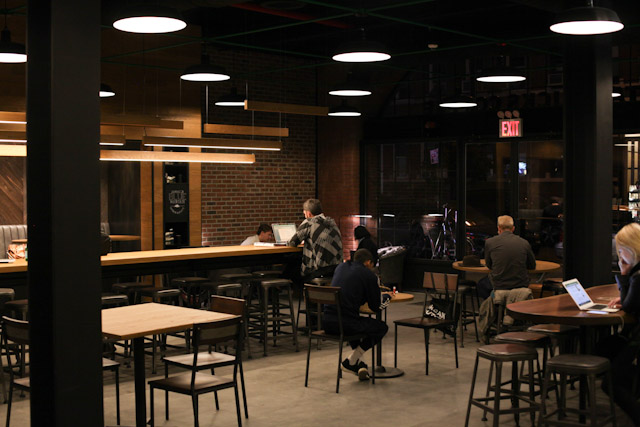 Giles repeatedly cited the store's varied coffee tasting programs as a means of connecting Starbucks with the culture of Williamsburg locals. When asked whether or not this move might be a threat to other, more upscale cafés in the area, Toby's Estate manager Jonathen Liu told Gothamist "We think the cuppings [are] great. Anything to help the public fall in love with coffee, provide education, and further develop an understanding of its processes is a plus for everyone. We've built a great relationship with our community, we have a great regular clientele, and we look forward to continue serving them a unique experience to Toby's Estate."

But others in the neighborhood have made it clear that they don't consider the new Starbucks a plus for everyone. Locals were "frightened" by first Williamsburg Starbucks when it opened in a luxury condo building on Union Avenue in July, and last month a 500 signature petition was filed with the local Community Board 1 SLA Review Committee, in hopes of barring the North 7th St location from serving alcohol. Pressed about the petition, Giles acknowledged some of local dissent and said the scaled-back liquor plans are "us listening to the community and taking those cues."

This Starbuck's greatest selling point to its new neighborhood (and the hordes of tourists that come to photograph its graffiti-style advertisements) is technological. Graves opted to study at the Starbucks last night after seeing the multitude of open power outlets installed for guests, and at the same table Mike Connor, 50, worked happily from his laptop while brushing off suggestions that Starbucks threatens Williamsburg from a cultural standpoint.

"Williamsburg changed, and it wasn't Starbucks that did it," Connor said. "They’ve got great bandwidth here. It’s a really nice Starbucks, a lot of the ones in the city are overcrowded. This one is incredibly beautiful."

"But I'm not buying coffee, I don't like it," Graves said, instead choosing a lemonade.

Both Connor and Graves were resigned to the fact that, really, a Starbucks in Williamsburg doesn't mean much anymore. The neighborhood, particularly on the northside, has changed into a kind of SoHo East, a place where Oprah-branded tea is viable product, and the prospect of watching happy tourists toting around bright red to-go cups sounds reasonable. Connor said it best as he typed away at his computer: "“For some reason everybody wants to come here, hordes and hordes of people, and I don’t know what they’re looking for. But getting upset about it is ridiculous. It is what it is.”

#gentrification
#new restaurant and bar radar
#starbucks
#williamsburg
#Williamsburg Starbucks
#original
Do you know the scoop? Comment below or Send us a Tip