Our latest Quick Bites brings us to the East Village for the best $1.50 skewers in town.

Did you ever go to Alder? Wylie Dufresne's avant-garde bar food spot turned tasting-menu restaurant in the East Village, which closed last summer after a two-year run? If yes, then you know exactly what the interior of Jason Wang's brand-new Biang! looks like.

True, Dufresne's moody cityscapes on the walls have been replaced with cartoony pandas, and the music is now Wang's trademark hip-hop mix, but otherwise everything's the same: the layout, the wide metallic-topped bar up front, the chairs and tables, the raw beams on the ceiling, the wooden entrance with that faux-branch door handle. All of which is totally fine, because it means that it only took a couple of weeks from Wang's announcement that Biang! was coming, to Biang! actually being here. 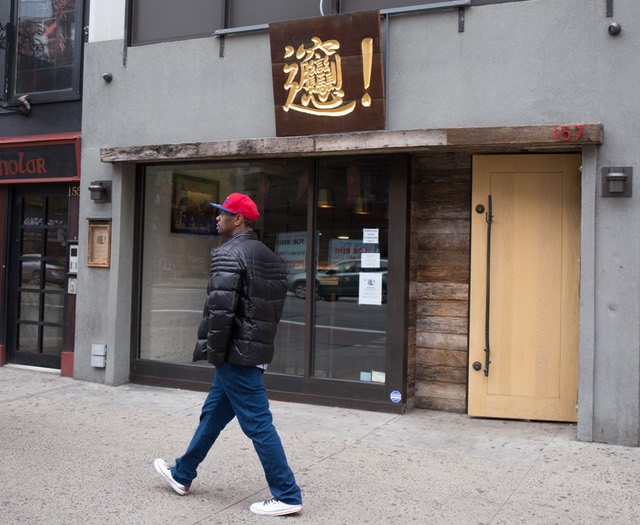 Stepping back for a second, for those who don't obsessively follow noodle news, Jason Wang is the co-founder (with his dad) and creative force behind the beloved Xi'an Famous Foods, a noodle- and dumpling- (and lamb-burger-) mini-empire that started its run a decade ago in the basement of Flushing's Golden Shopping Mall and today operates nine outposts in Manhattan, Brooklyn, and Queens.

In 2012, the Wangs launched Biang! in Flushing, as a proper, table-service version of their fast-casual original, but that location has since been remade back into a Xi'an. So this Biang! in the East Village, which opened last week smack in the middle of the neighborhood's frattiest bar row? This is the only Biang! in town.

By the way, the name is an onomatopoeia, inspired by the sound of noodles slapping against the kitchen's workspace counter during the pulling process.

THE BITES
The menu at Biang! features many of Xi'an's best dishes—the Spicy Cumin Lamb Burger, the Liang Pi "Cold Skin" Noodles", the Spicy and Sour Pork Dumplings—as well as a few Biang! originals. I tried to focus on these newbies during my opening weekend feasts, but a couple of personal Xi'an favorites proved to be too tempting to resist.

The Spicy and Tingly Beef Biang-Biang Noodles, for instance, exemplifies everything I love about Xi'an (and, now, Biang!): huge, explosive flavors that somehow don't completely overwhelm the taste of their individual ingredients. The big beef chunks here are fall-apart soft, the hand-pulled noodles thick and chewy (but not gummy), each bite fiery as hell at first, until the numbing peppers kick in and everything tingles.

Another Xi'an go-to of mine, the stuffed-to-bursting Spicy and Sour Spinach Dumplings, is equally excellent at Biang! A vegetarian dish (of which there are several on the menu), the fluffy, garlicky spinach inside these plump beauties is not just for bulking up the dough and sauce; in fact, the dumpling skin is super-thin, and the greens could stand alone as a side dish at any good mid-range restaurant. Which isn't to say that the sauce doesn't have plenty of personality and bite—it does—but it shows the care and skill which goes into everything here. 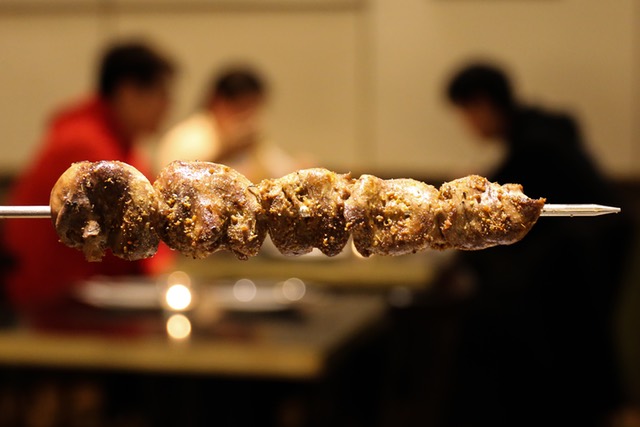 Unique to the Biang! menu are skewers, either bathed in a spicy sesame paste (and garlic, and chili oil... nothing's really "light" here), or seasoned with an intense cumin (and red chili, and secret "proprietary spices") rub. I had the Beef Stomach, the Chicken Heart, and the Squid, and all three were grilled to tender perfection. Especially the hearts, which are so good they'll make you wonder why that bird's liver gets all the glory.

A Fiddlehead Fern Salad made for lively side/starter "small plate," the green fronds not losing any of their crunch and character despite being drenched in Szechuan chili oil and black vinegar. The sunnyside-up Quail Eggs are plopped atop slabs of no-joke-spicy Chinese sausage and slices of toasted steamed bun. And the Sauteed Young Chicken Longevity Noodles, at $14 the most expensive item in the joint, is a huge platter of juicy hacked-up chicken, bright bell peppers and bok choy, wonderful potatoes (with a sunchoke-like feel to them, firm and flavorful), all with a mess of fat, udon-style noodles.

THE VERDICT
Biang! serves exciting food in a comfortable space with fun music and a convivial staff at prices that are insane. And word hasn't gotten out yet! On both Friday and Saturday nights last weekend only a handful of tables were filled. If everything goes according to plan, this is where I'll be for Christmas dinner, before hitting one of the four theaters right nearby.