The endless debate over the best pizza in NYC has been settled once and for all by the presumptive next mayor of New York City. It's not Lucali, it's not Artichoke, it's not Franny's, it's Di Fara, the legendary little Midwood pizzeria where faithful pizza obsessives wait patiently for a taste of Dom DeMarco's renowned handiwork. Here's de Blasio's answer to the question that regularly tears New York apart:

Di Fara Pizzeria in Midwood, Brooklyn. And to all the Manhattan foodies out there: it's not even close. This is clearly the best. And yes I'm from Brooklyn. PS: They use buffalo milk mozzarella, which is beloved in my grandfather's provence in Italy.

Yes, de Blasio has such a commanding lead in the polls he's perfectly comfortable trashing ALL THE MANHATTAN FOODIES. In a semi-related question during today's Reddit interview, another person asked, "Under Bloomberg, we lost countless mom-and-pop shops, some several decades old, and we gained way too many chain stores. Where do you stand on rent regulation for small businesses, especially those that have been around a long time, and what will you do to stop the spread of chains?" Quoth de Blaz:

I have been shocked by how negative many Bloomberg policies have been towards small business. Some people think of him as a businessman mayor, but they need to understand he never owned a small business and doesn't have that perspective. From my point of view, small businesses are the ultimate grassroots job creation engine and also incredibly important to the character and strength of our neighborhoods.

I considered years ago the concept of commercial rent control, and don't believe it's workable, but what we can do is end policies that hurt mom and pop stores like the constant and arbitrary fines the city government has levied and we can use zoning laws and tax policy over time to support family owned businesses. Very good example on upper west side over the last few years where changes in zoning made it harder for certain chain stores to develop and easier for mom and pop shops to survive, so that's a model I want to follow. 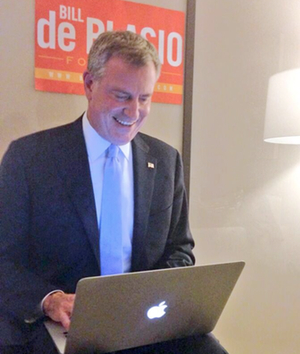 One Redditor wanted to know what de Blasio would do about the too-damn-high rents if elected mayor. "Do you have any thoughts on getting NY rents down to something sane without distorting the market? Rezoning? Added transit? Physically making new land?" Also Sprach Blazathustra:

I am working in my secret laboratory on a new land creation machine! Just kidding. My focus is on greatly increasing the amount of affordable housing — 200,000 units over the next 10 years. I want to see much more aggressive policies in terms of how the city works with the real estate industry. We don't have a methodology for lowering rents, but we can focus on creating more affordability, and strengthening our current rent regulation laws to protect the affordable housing we now have.

But what about bike lanes? During the primary, de Blasio took heat from the radical bike lobby for criticizing the DOT's implementation of bike lanes. Asked by Reddit whether he plans to bike to work if elected mayor, de Blasio said:

Unfortunately not, but let me tell you a story and I'll explain why I give you that answer. In 1990, I was in Seattle with my brother Steven, and we both bought mountain bikes, and we went on an amazing bike trip through western Montana, which is a really beautiful place… best seen by bike. Then I brought my bike back to Brooklyn, and although there were a few years when the kids were younger when I used it a lot, in recent years I almost never have used my bike. That's the sad truth. So I don't think it's likely I'll be using it to get to work, although I really appreciate and admire people that do, And I want to make it easier for people who do.

Asked about his favorite book, de Blasio revealed that, growing up, it was The Autobiography of Malcolm X. (Now it's Nothing to Fear by Adam Cohen "about the New Deal, and the people who made it happen.") But perhaps most importantly, de Blasio finally revealed how his son Dante keeps "the shape of his hair so perfect":

Dante works conscientiously on his hair. VERY conscientiously. He does not leave the house in the morning without carefully using his pick to strike a perfect geometric balance. I witnessed with my own eyes the President of the United States evaluating Dante’s Afro up close, and even the president admitted that the Afro of his youth was not as full and perfectly proportioned. So Dante has achieved something spectacular.

And asked if he would continue doing Reddit AMAs after he's elected mayor, de Blasio replied, "You betcha."