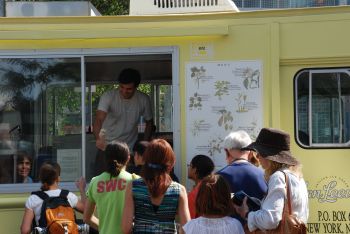 This summer the Van Leeuwen Ice Cream Trucks (there are two now) have successfully elbowed their way into New York City's booming "dessert truck" market by peddling a creamy, gourmet ice cream that makes Kool Man look like Fool Man. Made with meticulously sourced ingredients and an emphasis on sustainability (the ice cream comes in cups produced from Bagasse, a chemical-free fiber made from sugar cane; the spoons are made from cornhusks), it's a dessert that's as delicious as it is conscientious. Benjamin Van Leeuwen, the young founder of the company, recently told us a little bit about what sets his artisanal product apart from the others.

How did the idea for the truck come about? I used to drive a Good Humor ice cream truck, but I never enjoyed eating that ice cream. I have always been obsessed food and how great ingredients are produced. I am very interested in the biodynamic and slow food movement, basically food that is produced in a traditional way, where the focus is quality rather than efficiency. I needed an outlet for this. I chose ice cream, as it is one of the few things that can be produced on a large scale without any degradation of quality. I wanted to re-energize the ice cream truck and sell, not good ice cream, but incredible ice cream out of it.

How have the flavors been decided? I wanted to do classic flavors as well as they could possibly be done. I wanted to showcase the wonderful intricacies of flavors like chocolate, vanilla and Pistachio. I think this can be done well by keeping it simple. And when it is simple, it is harder to hide blase ingredients. Since we only use the best, we can keep them basic. It's like eating a really good local organic fresh carrot; you can eat it raw on its own. A generic grocery store carrot would have to be roasted in duck fat to taste good. Some of our flavors chose themselves, in the sense that I found the flavor and decided it was so good that we absolutely had to incorporate it into ice cream. This was the case with the Hudson Valley red currants and the Piedmont hazelnuts.

Are there any upcoming flavors we could look forward to? Caramel, Banana and Pumpkin.

How does the Van Leeuwen ice cream differ from others? We only use fresh milk, fresh cream, sugar and egg yolks. Many other super premiums use this stuff but they supplement it with dry or condensed milk, more sugar and sometimes corn syrup, whey protein and stabilizers. All of this stuff thickens the product. We believe that made the traditional way with only milk, cream, eggs and less sugar, ice cream tastes better. Ours has a light and clean taste but is also very creamy. By not using as much sugar our very special and artisanal flavors can come through. 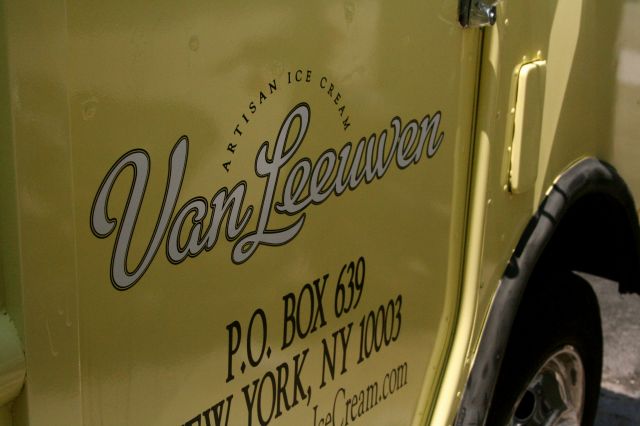 Have you ever considered having music on the ice cream truck? What songs would you include? I considered it, but people seem so thankful that we don't that I nixed the idea. I'd want Mark Mothersbaugh to compose something.

Given the opportunity, how would you change New York? Less cars. I would impose a steep emission tax. There are too many cars. Too loud, too smelly. I know we have ice cream trucks, but that is work. I see so many folks driving when they could use public transport. I would make that better too. Also, in food, I would outlaw high fructose corn syrup' it is so bad for us and kids drink it in soda. It screws up the endocrine system.

Under what circumstance have you thought about leaving New York? I couldn't leave; nowhere on Earth has this energy. I would leave to get closer to nature. I like the extremes, I either want pure city or very secluded nature. Nothing in between.

Do you have a favorite New York celebrity sighting or encounter? Bill Murray at a Seu Jorge concert. I said, "Hi." Then he said, "Hi."

Best cheap eat in the city. "Eat" on Meserole Ave in Greenpoint. They serve incredible local organic produce, menu changes twice a day and nothing is over $9, most are $5 or $6. They have herbal tea, fresh picked chamomile and mint. Very simple food cooked perfectly.