Ben & Jerry's Free Cone Day is Upon Us 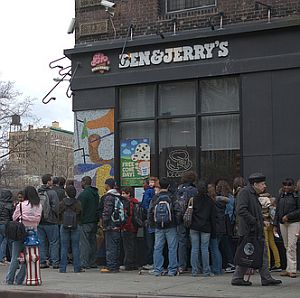 Note to middle management: today’s the day workplace productivity takes its annual nosedive, as employees across America wait on interminable lines for handouts at Ben & Jerry’s. Free Cone Day – not to be confused with Free Clone Day – lasts until closing time at five participating Ben & Jerry’s scoop shops in Manhattan.

Keep in mind that the free scoop is smaller than usual, but roustabouts with time to kill can conceivably get right back on line for another handout. Next month marks the 30th anniversary of the first Ben & Jerry’s in Burlington, and this month marks eight years since the company was gobbled up by multinational conglomerate Unilever.