Last year, Governor Cuomo announced that a new Penn Station entrance—the East End Gateway—would be constructed at 7th Avenue and 33rd Street (this is part of a $600 million revamp of the station). Construction is starting next week, and, surprise, a whole bunch of businesses recently found out they need to close. Among them is the beloved commuter fave Tracks Raw Bar & Grill. The MTA has asked them, along with 9 other Penn Station tenants to vacate their spaces by August 31st.

Tracks has been a part of Penn Station for around 17 years. The other businesses closing along with Tracks are Auntie Anne's Pretzels, Au Bon Pain, Bank of America, Carlton Cards, Dunkin Donuts, McDonald's, Jamba Juice, and Penn Wine & Spirits.

An MTA spokesman told Gothamist on Friday morning, "No one is satisfied with the conditions of Penn Station and this is part of our transformative work to widen the main LIRR corridor, raise ceilings, build a new entrance that will bring sunlight to the main LIRR concourse and improve lighting and signage. The result will be a spacious and less congested station that is safer and easier to navigate, along with better amenities for travelers. This once-in-a-generation project has been talked about for many years and when it’s completed New York will finally have the type of modern transit hub that residents and visitors deserve." (If that other "once-in-a-generation" Penn Station project didn't happen, we wouldn't be here.)

In anticipation of this work (which is scheduled to conclude by 2022), the tenants have all been on month-to-month leases for over a year. Tracks co-owner Bruce Caulfield told the NY Post, "I’m losing my entire livelihood," noting he was told there would be no more lease extensions after May 1st, but he thought Tracks was far enough away from the construction zone so "we held out hope." 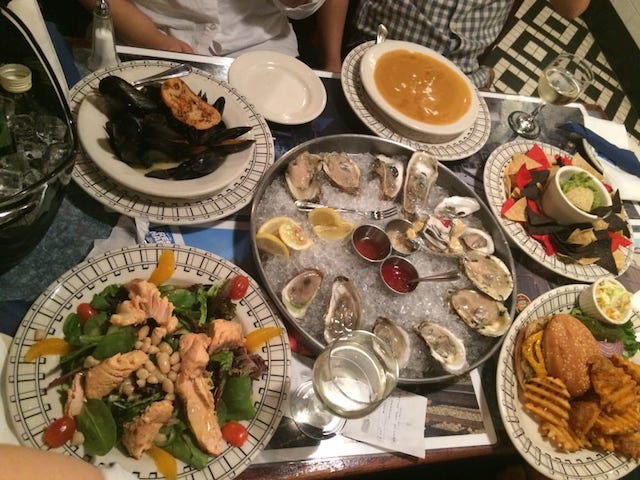 While some may find consuming oysters, clam chowder and shrimp cocktail in the bowels of Penn Station unappealing (Gothamist's Chris Robbins' rule is: "No Windows, No Oysters"), the food has gotten good reviews from customers—on Yelp, one patron noted the offerings are "far above what you would expect at Penn Station," which pretty much seems to be the consensus.

We're told the MTA is delivering the vacant spaces to Vornado (and their contractors) and as a result, they will determine if any of the businesses will be offered a chance to return once the work is concluded.

Caulfield told us that he's "willing to accept the decision... I understand the station and transportation is a priority over a restaurant, but I think both could work together." He has not ruled out Tracks reopening, and is hoping "someone would just give this a more careful look."

"This is sort of a throwback if you look around you," Caulfield noted when we dropped by today. "You'll see memorabilia from the railroad from the old Penn Station murals. I'm a big history buff, I'm a lifetime New Yorker, so it's important to me to carry that on," he said. "I'm feeling a sense of loss as like someone took away my child in a way, because I created this from my heart."

Regular Roy Beierlein was also there when we dropped in after the news broke, enjoying his mid-day meal—he told Gothamist, "People say to me, why do you go downstairs when you have all these great options in the city. I think you really need to go to TRACKS and eat there to know what I'm talking about." Beierlein says he eats there two or three times a week—"It's a home away from home. It's a place to get together with friends and family. It's great food. Great service. Bartenders make you feel like home. It's a little bit like Cheers."

This article has been updated with comments from the co-owner of Tracks as well as a regular at the bar.