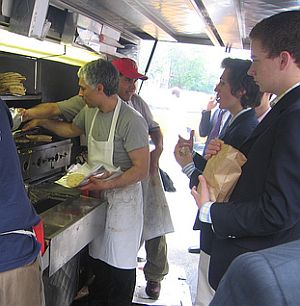 Fellow vendors and loyal customers are rallying to the defense of Antonios Dragonas, the 50-year-old pushcart food vendor who may soon be put out of business. For the past 25 years, Vendy runner-up Antonios Dragonas, has been serving his famous lamb shish kebab from the corner of Madison Avenue and East 62nd Street, but now the Department of Health is refusing to renew his license and permit.

The Times has it that during a twelve month period during 2006 and 2007 Dragonas was cited for 19 violations of the New York City Health Code, including “failing to protect food from potential contamination and failing to keep it at required temperatures, as well as handling food without gloves.” Over time, he’s accumulated 42 outstanding violations, totaling $16,865 in unpaid fines. The health department refused to renew his license in February and is urging a judge to make the suspension permanent.

Dragonas’s lawyer tells the Times his client has since “remedied the food-related violations, but some of the tickets — for offenses like not wearing a hat or setting his cart up nine feet from the corner rather than the required 10 feet — seemed overly punitive.” Droganas says he’s never had anyone complain, and he’s so popular that some local workers call their orders into Dragonas to avoid the lunchtime rush. Check out this terrific video about him on the Street Vendor Project website.