THE VIBE
It's impossible for me to talk about Sadelle's without talking about prices. After all, this opulent new Soho "bagel shop" is run by the swaggering Major Food Group, operators of Carbone (home of the $64 Veal Parm), Dirty French ($39 Duck a l'Orange; add $10 for Haricorts Vinaigrette), ZZ's Clam Bar ($56 Tuna Carpaccio), and, coming in 2016, the reboot of Four Seasons (astronomical everything, probably).

Those restaurants are all reportedly very good, by the way. It's just unlikely that I'll ever be able to eat in any of them. I am a big fan of their mid-priced mini-chain Parm, though.

Anyway, if you were hoping Sadelle's would be more Parm-ish than Carbone-y in its pricing, I'm sorry. In addition to that $29 deli meat sandwich (more on that in a second), expect to shell out $16 for a bagel with salmon, $22 for a Waldorf Salad, $34 for a Grilled Shrimp. This is lunch, remember. Ok one more: the Classic Egg Sandwich, which has the heft of your standard deli offering and comes accompanied by nothing, is $17.

All of which befits Sadelle's prime West Broadway location I guess, thick as that area is with free-spending tourists and well-heeled locals. The space itself quietly screams privilege, with its multi-tiered dining room (VIPs can see-but-not-be-seen all the way up top), dramatic contemporary chandeliers and tasteful paintings the size of roadsters, fireworks of fresh flowers, elegantly-scuffed wooden chairs and leather-cushioned benches set before heavy marble or gilt-edged table tops.

There's also a busy take-out counter in the front, small but swarming with friendly fish slicers and babka boxers, where you can pick up chef Melissa Weller's first-rate bagels and baked goods. Everything's expensive up here, too, but if you just want to try Weller's stuff—and you should, because she worked long and hard on her bagel technique, and the result is terrific—this is the way to go. There's a banquette along the wall behind the hostess stand on which you can probably get away with sitting and eating, say, a bagel sandwich, or you can grab a spot outside on one of those expansive storefront stoops common on the avenue.

Your greeters, various managers, hostesses, and counterpersons are all helpful and amiable; the waitstaff a bit rougher around the edges, but that's likely a function of opening week. Overall, Sadelle's is lovely, it's comfortable, it looks and feels like money.

THE BITES
The outlandish prices and casual-millions vibe would make this all seem like a total joke, except that the food at Sadelle's also happens to be really good. 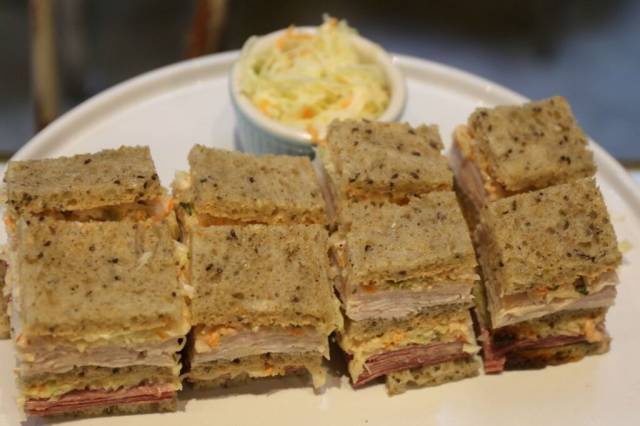 Take the Triple Decker Sandwich. I asked my server which of the four options—salami, ham, turkey, roast beef; you can choose two—he thought were the best, figuring at thirty bucks everything's house-baked and -cured and -roasted. He suggested the turkey, so I asked if it was the same as Parm's justly famous bird, to which he replied, "What's that?". When I explained, he told me, no, it's Hebrew National. I started giggling. "And what about the other three?" Turns out, it's all just Hebrew National brand deli meats back there (he confirmed with the kitchen), like they have at many other places.

The weird thing though: my sandwich, turkey and salami, was fantastic. And I don't really know why. It had cole slaw for crunch and Russian dressing for sweetness, and the bread was a kind of thin-sliced wheat (he told me it was wheat, anyway; it seemed more like a rye), and there was a nice balance among everything, without the gross mountains of meat you find with other tourist-trap sandwiches. It was moist, it was interesting and had depth, it was fun to eat all cut up into little tea-sandwich squares, it was delicious. Somehow the whole transcended the seriously mundane parts.

More straight-forwardly great was my Poppy Bagel with Sadelle's excellent House Salmon, plus a little cream cheese and some capers. Weller's creations are on the small end of the bagel scale, and they nail my personally preferred chewy/crusty ratio to perfection.

In fact, the best thing I ate in two visits to Sadelle's was Weller's Pumpernickel Everything bagel, which I ordered to accompany my $10 crock of perfectly decent egg salad, but which I wound up eating most of with just a little bit of butter. Intensely dark and aromatic, and studded with wonderful things on the outside that crackle with every bite, this was almost certainly the single best bagel I've ever had. 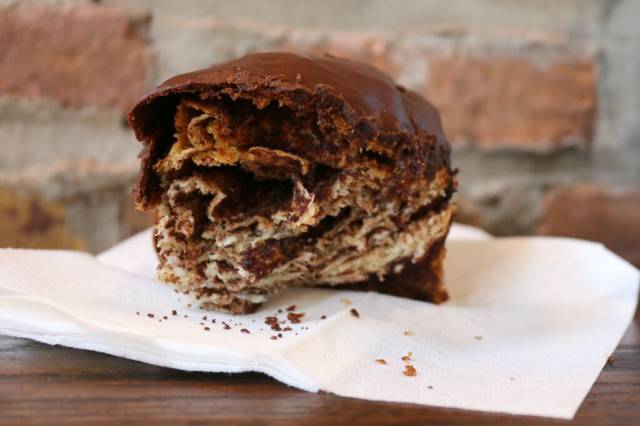 Weller's sweeter creations all look amazing (I have to go back to try the Sticky Buns), and her Chocolate Babka—with both milk and dark chocolate swirling around the buttery dough inside, plus a shell of dark on top—will get a legitimate Breads vs. Sadelle's battle going in this category. It's wonderful right out of the oven, and just as good hours later, re-warmed with some coconut ice cream on top. The Oatmeal Raisin Cookie was okay, but the sweet and satisfying Chocolate Chip really got my attention with its dense chewiness. This latter treat should also find its way onto "Best of" lists.

THE VERDICT
I wouldn't feel comfortable sending anyone I know to eat in Sadelle's dining room, no matter how good the food. It's just too expensive, with no discernible reason on the plate why it needs to be that way.

However, if you want to splurge on a sack (actually: glossy, heavy-stock, heavily-branded shopping bag) of baked goods and bagels, the take-out appetizing counter is well worth busting your budget just a bit.

#quick bites
#sadelle's
#original
Do you know the scoop? Comment below or Send us a Tip