Behind The Scenes At Cinnamon Snail: Doughnut Tsunamis & Pet Wallabies

It's close to midnight and the hallways of the former Pfizer building on Flushing Avenue in Williamsburg are silent save for the eerie buzz of the fluorescent lights casting a jaundiced pall over the labyrinthine hallways. During the day, the repurposed pharmaceuticals facility hosts a lively group of mostly food startups, who are using the space as a manufacturing hub as they expand their businesses throughout the five boroughs and beyond. But the night is reserved for the overnight bakers, including a small but productive group from the popular vegan food operation Cinnamon Snail, who've since withdrawn from the food truck game to open a food stall in newly-minted food hall The Pennsy near Penn Station and Madison Square Garden.

The popular vegan food operation, begun by chef Adam Sobel six years ago, has been utilizing the commercial kitchen space for a few years, moving their New Jersey-based operation to be closer to their new midtown digs and their expanding catering business. Here, Sobel and his crew of enthusiastic young vegans fabricate dozens of different doughnuts, cinnamon rolls and other baked goods, and create the bases for the sandwiches and salads they serve to Midtown lines just as long as the ones they drew for their their food truck. 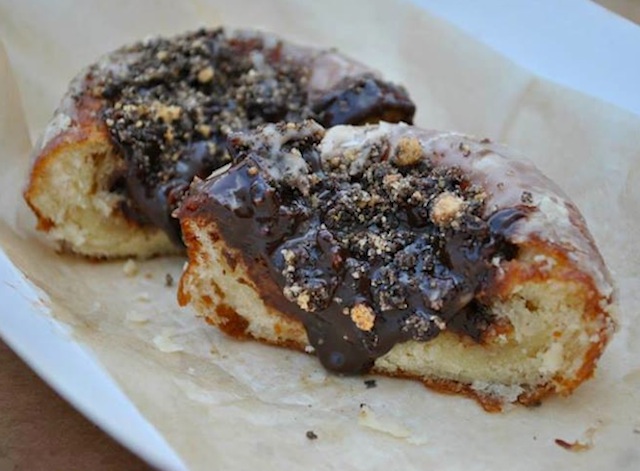 The Norberweiberberweiberhydrafab, one of Sobel's more outrageous creations (Via Facebook)

"Well, The Pennsy never gets towed or gets parking tickets, which is huge," Sobel says of life post-food truck hustle. "It's basically a zillion less things that could go wrong in the course of a day." The new space has also introduced The Cinnamon Snail's food to a different demographic, which Sobel says has led to a few misunderstandings and explanations. "We have people wandering up and being like, 'Wait, there's no meat in this burger' and they're kind of pissed? We deal with that a little more now, but we've always been dealing with people who are tourists coming up to our truck and stuff and asking for a buttered roll. We don't serve buttered rolls."

"I think this is a time where vegan food is really coming out of the shadow of stereotypes of being really bland health food, like brown rice and steamed vegetables, macrobiotic food or being super-processed, everything-is-fake food and fake cheese flown in from Taiwan and thrown in a deep-frier with Frank’s red-hot on it," Sobel waxes on the current vegan landscape. "Now I feel like veganism is out to prove itself as a major culinary item that can be extra-delicious and innovative and not just some bullshit."

Sobel downplays The Cinnamon Snail's role in the culinary shift, but he's undoubtably introduced a kind of vegan fare that's just as crave-worthy as its meat counterparts to a population that wouldn't ordinarily be seeking out vegan food. "That’s what our business model has been about since we started...making our food as attractive and understandable to people who really don’t care about veganism at all...yet."

When he's not making unpronounceable doughnuts, Sobel's teaching yoga in his current home state of New Jersey—he grew up on the Lower East Side—or spending time with his family and their large animal population, which includes a wallaby named Doyle Huckabee.

Me and my boo, Tee-Doo! She's always got one eye on me! I'm really starting to like that border collie, though. @teetersperber #wallabies #wallabyproblems #bordercolliesofinstagram #bordercollie #ialwaysfeellikesomebodyswatchingme #pets #petsofinstagram #petstagram #instapets

"He's way easier to take care of than a dog. Not the smartest companion...we have border collies, and they're very clever dogs, and he's...I'll be surprised if he ever learns his name or anything. But he's very friendly, a nice guy."

#adam sobel
#cinnamon snail
#gothamist films
#profiles
#the pennsy
#wallabys
#original
Do you know the scoop? Comment below or Send us a Tip