“I want people to feel like they’ve had an experience that can’t be put into words,” says Justin Fornal, author, field researcher, and founder of the Bronx Pipe Smoking Society’s Small Game Dinner. The exotic annual feast, which transpired for the eighth time this past Saturday, was indeed as ineffable as Fornal intended. The Small Game Dinner experience featured a plethora of unusual protein sources, a mystical ritual meant to connect this world to the spirit world, an opportunity to smoke custom tobacco blends from Fornal’s extensive collection of pipes, and hobnobbing with a wide selection of adventurous New Yorkers.

The Small Game Dinner has come a long way since its first iteration in 2011, back when it was a freezing party for 30 in the dilapidated Bronx Borough Courthouse; now the soirée boasts some 150 guests in formal attire (with a strong emphasis on skull accessories, feather accents, and fur pieces) in the once-regal Andrew Freedman House.

“Everyone knows you can eat this stuff if you have to, but you can also make it something people want to eat,” says Mike Pichetto, an executive chef in Pennsylvania, who created the muskrat rolls. 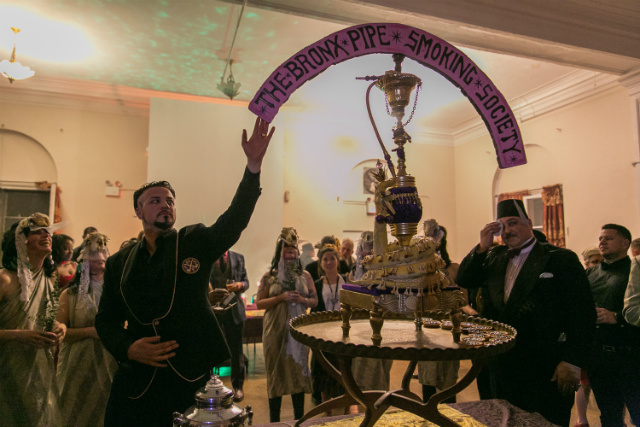 “We’re one of the only countries that’s so selective about what we eat,” says the evening’s mixologist, Blue Rivera. “We’ll eat an animal’s legs but we won’t eat past the shoulders. We’ll eat the breast but not the tongue.” Rivera, who’s Puerto Rican and Hawaiian, born and raised in the South Bronx, talks joyfully about his drinks. “We’re not doing this to gross people out; everything we’re serving is really traditional. The chapulíns come from Guadalajara, and the worm larvae is a Mexican delicacy.”

Cultural tradition is a common theme among the chefs. Jennifer Garib, who made the otter with her business partner Savitri McCrea, says, “I never thought to prepare things like this, but it’s amazing to introduce them in Caribbean style.”

“The root of the event is cultural information exchange between a diverse group of people who might otherwise never have a reason to be in the same room together,” Fornal says. The gathering was a diverse intersection of hunters and trappers, Santeros and Haitian Voodoo practitioners, Malians and Yorubans, Shriners and Freemasons, Trinidadians and Jamaicans, and an array of artsy and intrepid New Yorkers.

I spoke with a scuba-diving instructor, an interactive video programmer, and a Brooklyn bar owner; composers, artists, and bloggers; a college administrations officer, someone who does PR at the New York Botanical Garden, and a member of the Explorers Club, sporting a handmade deer-antler corsage, who doesn’t eat meat but still attends each year. “I come for the experience,” she says. “This isn’t the kind of thing you see every day, especially in the Bronx.”

Dinner included even more unusual fare, prepared in even more inventive ways: Fire & Steam Raccoon, Beaver Gumbo, Jerked Coyote, and Porcupine “Pance” with Almond, Cherry, and Sauce Choron. “At one time, all these animals were consumed by people,” Fornal says, “Once you get past the mental hurdle of what you’ve been programmed to accept as an edible protein source, you can change your perspective.”

The chefs range from Mexican to Italian to Guyanese to Thai, and many run restaurants in the Bronx or elsewhere in the tristate area. Fornal encourages them to work together to devise their dishes, like Michael Max Knobbe, Executive Director of the public-access TV station BronxNet, who partnered with Thai restauranteur Joe Boonchun to make the raccoon. “There’s such a camaraderie in the kitchen,” Knobbe says. “And there’s a euphoria that comes from eating the fruits of everyone’s labors.” 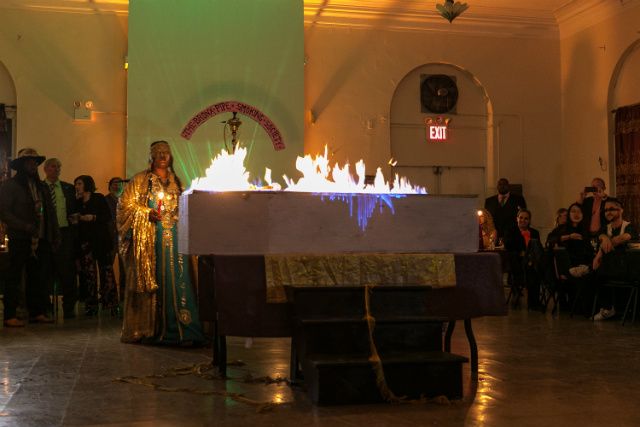 Before the main meal, there was a ceremony led by a Fulani and Native American “witch shaman” named Shine, which involved drumming and setting a coffin on fire. “We illuminated the room of the living with fire from the room of the dead,” Fornal says, “connecting our world and the spirit world.” The ritual was also meant to bring all the associated guests’ ancestors to the meal — “all these ancestors who never would have gotten a chance to dine together.”

Fornal emphasizes that no animals are killed in service of these meals—all the meat is supplied by the New Jersey Trappers Association, a group that uses animals for their pelts. “That’s going to happen no matter what,” Fornal says. “To me it seems a better honor to the animal to use the meat, the glands, the bones.” He cites the historical and even modern precedents for this, telling me that the Garifuna community in the South Bronx uses rendered skunk fat to make cough medicine, and indigenous groups across the Americas smoke dry powdered beaver castor with their tobacco, using tallow from other animals to fuse the mixture.

Since the host of these meals is a pipe club, the culmination of the evening is the unveiling of the Pipe of the Year, made by Fornal and Brooklyn darling taxidermist Divya Anantharaman. This year’s was crafted from a massive, eight-foot-long golden python that died of old age in a zoo. The pipes’ designs are influenced by historic Scottish snuff mulls as well as the first pipes ever discovered: those from the Tremper Mounds in Ohio, made by the Hopewell Culture around 300 BCE. These small stone pipes were intricately carved in the shape of animal heads, “so that when you’re smoking, you’re seeing through that animal’s eyes, harnessing that animal’s spirit,” Fornal explains. “With our pipes, the idea is that you’re celebrating the animal; there’s an element of worship as opposed to objectification.”

So the diners in their finery ended the evening by drinking tea infused with snake meat and smoking tobacco mixed with the same — honoring the animals and lingering well past midnight. “I want people to engage the world around them on a deeper level,” Fornal says. “Some people just come here for the magic and the rituals, and don’t eat the animals at all.”

#bronx pipe smoking society
#small game dinner
#the bronx
#original
Do you know the scoop? Comment below or Send us a Tip