Battling the First Hangover of '08? 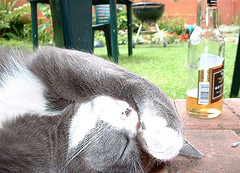 Was your New Year's Eve a recipe for a hangover? Luckily there are a few recipes to cure what ails you, too. Last year we found some facts about hangovers, but learning isn't going to make that first headache of '08 go away.

From the undoubtedly reputable site called RUPissed? come these hangover cures, and except for the Vegemite you can probably find most of these things in your apartment (or within a one block radius): soda (we prefer ginger ale), ginseng, Vegemite on toast, cold pizza, aspirin, bananas, vitamin C, chocolate milk or a good 'ol reliable hot bath. The site also suggests coffee, but that will only dehydrate you more.

Urban Legend will tell you that sometimes "the best thing for what ails you is more of what ails you, 'hair-of-the-dog-that-bit-you' nostrums have been popular since the time of Shakespeare (before that, etymologists tell us, the phrase referred quite literally to a method of treating dog bites)." Following that line of thinking, you may want to get a Bloody Mary -- or do what Hemingway did and mix some tomato juice with beer.

If you're feeling culinary, Top Chef had an episode last season in which the contestants had to cook food for people who had been drinking at a club all night. From that episode, try the winning Bacon Wrapped Shrimp (with grits!). For a hangover cure in a glass try strawberries, banana, frozen yogurt, milk and ice. And for a more natural cure head to Treehugger, who suggests a Lotus Root Cooler, Ginseng Licorice Tea and more. And don't forget to go outside and get some fresh air!